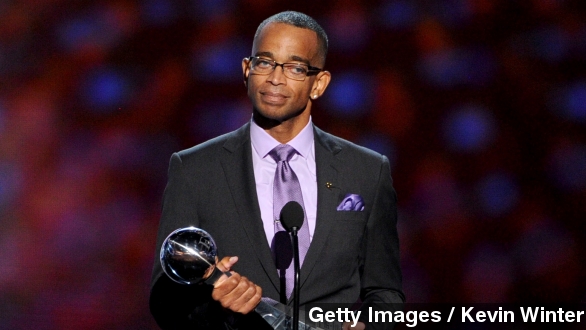 SMS
ESPN's Stuart Scott Dies Of Rare Cancer At 49
By Matt Moreno
By Matt Moreno
January 4, 2015
The sports network's longtime anchor was diagnosed in 2007 with a rare form of appendix cancer.
SHOW TRANSCRIPT

ESPN SportsCenter anchor Stuart Scott died Sunday after a long battle with cancer at the age of 49.

In 2007, Scott was diagnosed with appendix cancer, something he spoke candidly about when he was awarded the 2014 Jimmy V Perseverance Award.

“When you die, it does not mean that you lose to cancer. You beat cancer by how you live, why you live and in the manner in which you live," Scott said on ESPN.

Despite all the ESPN anchor’s airtime, USA Today said it was that speech that was his finest.

Scott first started his career in TV work after graduating from the University of North Carolina in 1988. He joined south Carolina’s WPDE and after a stint at local TV stations, he joined ESPN in 1993.

The ESPN anchor often cited his two daughters, Taelor and Sydni, as a big source of his motivation to keep fighting cancer.

Scott also maintained a close friendship throughout the years with ABC host Robin Roberts someone who also battled cancer.

The praise and admiration for the veteran sports guy has poured in from all over the country from journalists to athletes and more.

NFL Network anchor Rich“As you go to bed tonight, flip your pillow over to the cool side … you hit your knees tonight and pray to big man for his beautiful daughters who he loved Taelor and Sydni”

“We choose not to say Stuart lost to cancer at the age of 49. Instead we’ll simply say we all lost Stuart.”

Fellow ESPN anchor Mike Tirico tweeted after hearing the news, “For those of us who live using words, today there are none. Our prayers to all who were touched by Stuart Scott's incredible love of life.”

Scott is survived by his two teenage daughters.