ESPN Championship Coverage: On Its Way To Super Bowl Status? 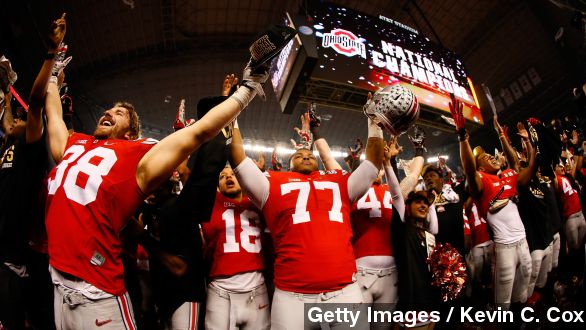 Ohio State will go down in the history books as the 2015 national champions of the first-ever college football playoffs. But it's ESPN who really scored big. ESPN scored an 18.5 Nielsen rating, setting the bar even higher with the best rating ever for a cable event.

This shatters the previous record of 16.1 the network drew for the 2011 BCS national championship game between Auburn and Oregon.

It's also a 21 percent improvement from last year's 15.3 rating for the Florida State-Auburn national championship game.

What's also impressive is Monday's game wasn't even all that close. The Buckeyes routed the Ducks 42-20 and never trailed after the first quarter.

What may be a factor, though, is this year's first-ever college football playoff system. Instead of the BCS committee selecting two teams to play in the big game, four instead got the chance to make it to the big one.

There was also ESPN's multichannel coverage:

"12 different ways to watch the game."

"That's more than I have fingers on my hands."

"I had to take my shoes off to figure out how many there are."

Twelve is a fitting number, since the outlet struck a 12-year, $7.3 billion deal in 2012 to gain broadcasting rights to the national championship game starting this year.

Businessweek points out though ESPN is paying much more per viewer for these exclusive rights, it will likely pay off down the line. "No matter how viewers are getting their video programming a decade from now, they will have to come to ESPN if they want live sports. And one way or another, they will have to pay because ESPN already has."

And with a spike in viewers comes a spike of advertisers ready to shell out big money.

Which is a huge part of the Super Bowl, where ads are almost as hyped as the game itself. ESPN was reportedly seeking $1 million per ad during Monday night's telecast. (Video via Volkswagen)

Ad Age writes, "Marketers might not get Super Bowl-size ratings, but they will get all the hype and passion at a fraction of the cost, far south of the Super Bowl's $4 million-plus rates and even half a million cheaper than spots in the NCAA Final Four basketball tournament."

Not surprisingly, Columbus, Ohio, home of the Buckeyes, rang in with the highest individual market rating at 51.2.