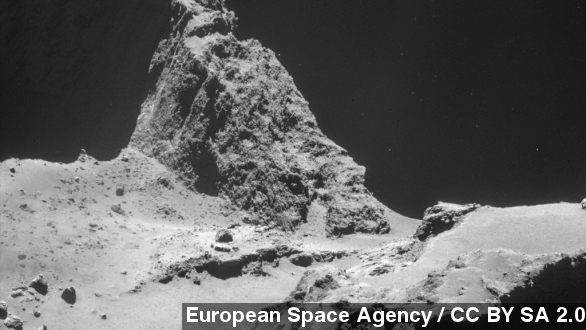 SMS
ESA Releases Images Of Philae's Kilometer-High 'Bounce'
By Cliff Judy
By Cliff Judy
November 17, 2014
ESA believes it's found the landing spot for Philae on Comet 67P/C-G, a location hundreds of meters from its first impact with the comet.
SHOW TRANSCRIPT

If landing highly specialized scientific equipment on a comet wasn't already nerve-wracking enough, the European Space Agency had to wait to see if the Philae mission would succeed as the spacecraft bounced a kilometer up off the comet during landing.

Late Sunday, ESA posted this blog entry showing what the agency believes is Philae's landing spot on Comet 67P/C-G. The dust cloud had already been observed, but you can now see what scientists believe is Philae itself and its shadow.

Philae has since gone dark because scientists believe it landed in a shady area of the comet blocking its solar panels, and the spacecraft ran out of battery Friday evening.

The world has been fascinated by ESA's successful attempt to land a manmade device on a possibly billions-of-years-old space body. But while the space agency received data from Philae, it still didn't know where it landed. (Video via European Space Agency)

In fact, ESA released these images taken by the Rosetta mothership Friday with the note Philae had landed at "a still unconfirmed location likely outside of these images."

The BBC notes the 200-plus pound spacecraft bounced approximately a kilometer up off of 67P/C-G and landed hundreds of meters from that first dust cloud.

Philae did manage to drill into the comet and transfer some data back to Earth. BBC reports just before the spacecraft went to sleep, it was ordered to raise itself a few centimeters and rotate in hopes of putting itself in the best position to someday catch more sun and recharge.

This video includes an image from the European Space Agency / CC BY SA 2.0.