Erykah Badu Inundates Us With Phone References In New Mixtape 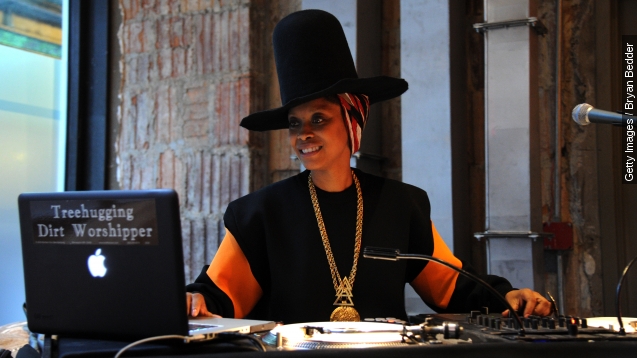 Erykah Badu might just be a little obsessed with phones.

The soul singer is back with her first project in four years — a mixtape titled "But You Caint Use My Phone."

"What inspired me to do the mixtape was me doing a cover of 'Hotline Bling.' ... I decided to keep the theme going and call it 'But You Caint Use My Phone' and all phone-themed songs," Badu told the hosts of "The Real."

The mixtape's title is an obvious callback to one of Badu's most popular songs and one of the first instances of her telephonic misadventures.

"You need to call Tyrone. But you can't use my phone," Badu sings.

Other phone references in Badu's earlier music include, but aren't limited to, a story about a brother who wouldn't call her back in the "Afro" skit from "Baduizm" and the somber tribute to the late J Dilla in "Telephone" from "New Amerykah, Part One." That track is also sampled in the mixtape.

You can hear Drake's "Hotline Bling" and "Hello, It's Me" from the Isley Brothers all over this mixtape. Badu also uses bits and pieces from her previous albums to fill in the holes between samples and telephone sounds, creating what she calls "TRap & B."

A press release in Pitchfork says, "Badu also used a tuning fork and Tibetan singing bowls to fine-tune these details, with the goal of creating a sound that brings peace and tranquility to its listener."

With all that work put into a mixtape, there's little chance of Badu fans actually putting their phones down. "I can make you put your phone down," Badu sings.

You can expect for Badu to perform at least one track from her new mixtape when she hosts the Soul Train Awards on Sunday, Nov. 29.