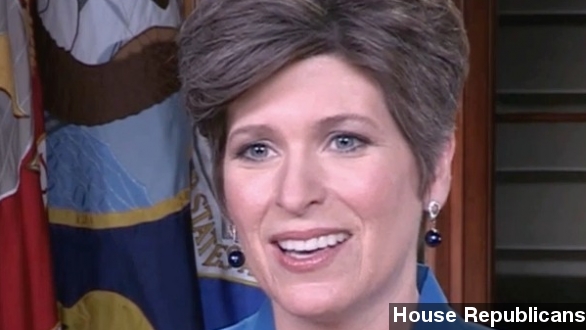 "Rather than respond to a speech, I'd like to talk about your priorities," Sen. Joni Ernst said.

Iowa Republican Senator Joni Ernst's response painted a much dimmer view of the economy than President Obama's State of the Union address.

"These days, though, many families feel like they're working harder and harder, with less and less to show for it. ... We see our neighbors agonize over stagnant wages and lost jobs. We see the hurt caused by canceled healthcare plans and higher monthly insurance bills."

"With a growing economy, shrinking deficits, bustling industry, and booming energy production  — we have risen from recession freer to write our own future than any other nation on Earth," President Obama said in contrast.

Ernst's answers to the economy's woes? The Keystone XL pipeline — which she called "the Keystone jobs bill" — and simplifying the tax code. She also mentioned cutting wasteful spending "with meaningful reforms." And though she didn't provide any details, she did end with a more optimistic tone.

"We know America faces big challenges. But history has shown there's nothing our nation, and our people, can't accomplish. ... The new Republican Congress you elected is working to make Washington understand that, too. And with a little cooperation from the President, we can get Washington working again."