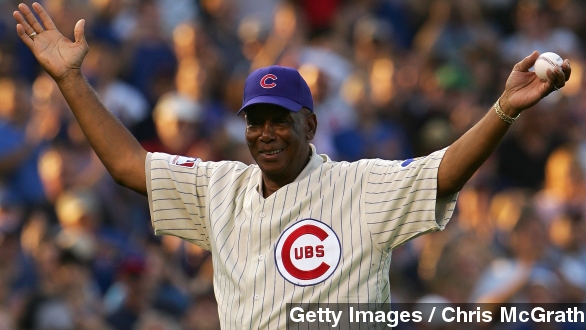 Baseball great Ernie Banks, or “Mr. Cub,” as he was known, died of unspecified causes Friday in Chicago. He was 83 years old.

Banks was the first black player on the Chicago Cubs roster. Over the course of his career from 1953-71, he launched 512 home runs and snagged a Golden Glove award for his performance as shortstop.

But Banks is perhaps best known for his irrepressible optimism and enthusiasm for the game. As he was fond of saying:

Banks received the Presidential Medal of Freedom in 2013, in recognition for his contributions to American culture.

“Ernie became known as much for his 512 home runs as for his cheer and his optimism, and his eternal faith that someday the Cubs would go all the way,” President Obama said at the ceremony.

Cubs chairman Tom Ricketts said on Friday, “[Banks] was a pioneer in the major leagues. And more importantly, he was the warmest and most sincere person I’ve ever known.”

Banks is survived by his wife, Liz.