Equal Internet Access Remains A Right For All US Citizens 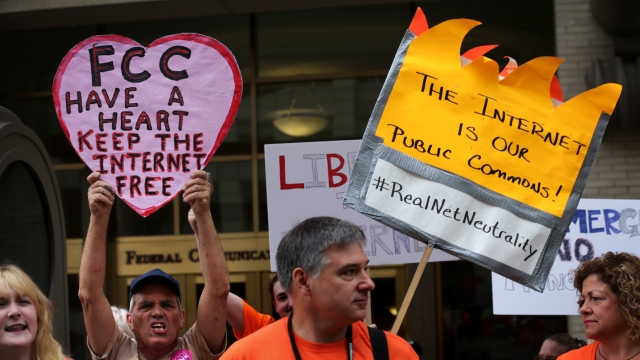 SMS
Equal Internet Access Remains A Right For All US Citizens
By Grant Suneson
By Grant Suneson
June 14, 2016
A federal appeals court ruled in favor of the Federal Communications Commission, saying equal access to the internet should be a public utility.
SHOW TRANSCRIPT

Clean running water, electricity to power your home and the ability to watch cat videos at high speeds: three things that all Americans have a right to access.

In 2015, the Federal Communications Commission moved to classify the internet as a public utility so the agency could regulate it and make sure everyone got the same access. On Tuesday, a federal appeals court upheld that decision.

That means internet service providers can't block or slow internet traffic or force people to pay more money to get top speeds. This is a big win for the idea of net neutrality, which says providers should provide uniform speed access to all online content.

Proponents of net neutrality like FCC Chairman Tom Wheeler say this ruling helps level the playing field for newer websites and startups that may not have as much money as more established sites.

"After a decade of debate, these rules finally provide strong safeguards for free expression and innovation on the internet," Wheeler said.

But the issue probably isn't completely settled. Internet industry leaders like AT&T have promised to take the case all the way to the Supreme Court if they didn't get their desired ruling.