'Entourage' Film's First Night Is A Buzzkill; Is It Doomed? 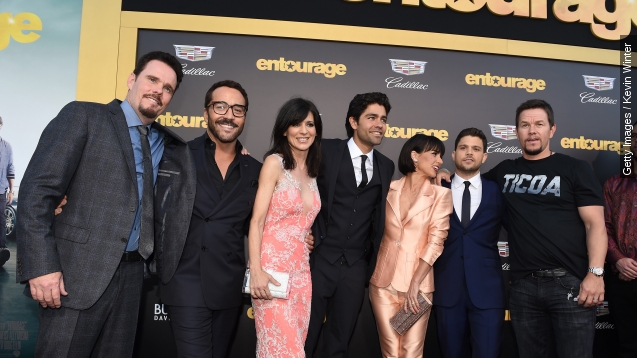 SMS
'Entourage' Film's First Night Is A Buzzkill; Is It Doomed?
By Lexie Hammesfahr
By Lexie Hammesfahr
June 4, 2015
"Entourage" premiered Tuesday night, but revenues were disappointing. Is this a fluke, or is the film destined to fail?
SHOW TRANSCRIPT

The boys are finally back and reportedly celebrating their opening-night sales at the box office Wednesday.

But if you look at the numbers, the highly anticipated "Entourage" movie really didn't do much better than 2001's "Josie and the Pussycats," which was also loosely based around the concept of going from rags to riches.

"Entourage" earned $5.4 million in its first day at the box office, and that includes the $2 million from the late Tuesday night premieres.

By comparison, "Josie and the Pussycats" opened to $4.56 million at the box office, making it No. 25 out of 200 on Box Office Mojo's "Worst Wide Openings" list.

And when Sean Penn's "The Gunman" opened this past March, it made just over $5 million opening night, earning it a No. 34 spot on that same list.

The low opening night numbers for "Entourage" could, in theory, be in large part because the movie opened on hump day.

But you'd be wrong. In 2010, "The Twilight Saga: Eclipse" opened to the highest Wednesday grossing of all time: $68.5 million.

Warner Bros. was trying to beat the competitive weekend box office with "Entourage," as other releases like "Insidious: Chapter 3" and Melissa McCarthy's comedy "Spy" were crowding the pool.

But critics hated it regardless. The film got a 32 percent approval rating on Rotten Tomatoes. But on the flip side, the audiences loved it — with 84 percent giving it a thumbs up.

So, why do people either love "Entourage" or absolutely despise it?

The Washington Post's Style Blog had an interesting theory, which, to summarize it, boils down to the series continuing for a few too many seasons.

The series was met with awards and critical acclaim when it finally fell into its stride in season two. What wasn't to love about it? Vincent Chase lived the American dream of going from Queens, New York, to LA with his best friends.

But the show didn't really have that much of a plot. Every season became the same: Vincent wanted to be in a movie, something bad happens, and then his agent Ari or manager E figured out how to make it work.

Seven seasons later in 2010, Washington Post critic Hank Stuever said the only thing that could pump life into the show was that "Vincent Chase must die."

So after eight seasons and almost four years since the conclusion of the series, are fans ready again to watch the boys live the life most people only dream of?

The success of this movie is going to rely on fans' initial reactions, because clearly, the critics are still over it.