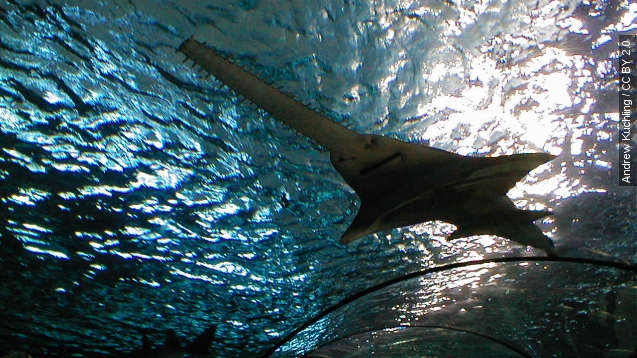 So this is a sawfish. They look kinda scary, like something out of a corny Syfy flick.

But the smalltooth sawfish is critically endangered, and scientists say the females are doing something rather drastic that species on the brink of extinction sometimes do: giving birth virgin Mary style.

This is according to new research published in the journal Current Biology. Researchers found seven of the female sawfish they examined in Florida were likely the product of asexual reproduction... which is weird for a species that usually reproduces sexually.

Here's how it works: Scientists say an unfertilized egg absorbs "a sister cell" that is almost identical to the egg. The offspring usually don't survive, but the sawfish's did, and they appeared to be healthy to boot.

And scientists found this by chance. They were observing a sawfish population in an estuary in Florida to see if they would mate with relatives. So they essentially went searching for inbreeding and got virgin births. Huh.

It's the first time researchers had seen this type of asexual breeding occur in the wild. Sky News reports these "virgin" births had only previously been seen in animals in captivity — and that this was the sawfish's way to "cheat extinction."

The discovery is important because it is causing us to rethinking what we thought we knew about reproduction in vertebrates.

One scientist involved in the research said in a statement this discovery could "rewrite the biology textbooks."

The smalltooth sawfish is currently listed as critically endangered. So, this extra reproductive help is needed.

This video includes images from Scott Ableman / CC BY NC ND 2.0 and Andrew Kuchling / CC BY 2.0.