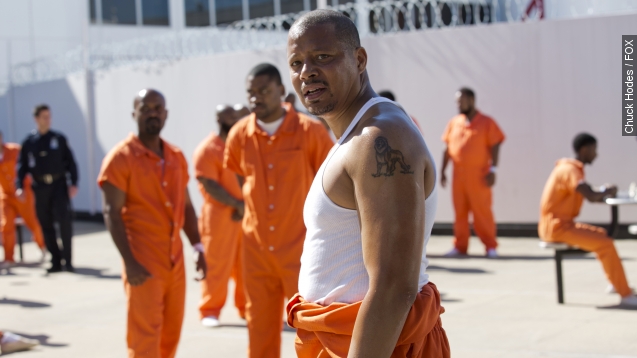 SMS
'Empire' Season 2: Even From Prison, Lucious Reigns
By Mikah Sargent
By Mikah Sargent
September 24, 2015
'Empire' is back and Lucious Lyon quickly set out to prove, even from prison, he still runs the show.
SHOW TRANSCRIPT

"Empire" is back, and one thing remains certain: No matter where Lucious Lyon finds himself — and no matter his situation — he still reigns supreme. (Video via Fox Network / 'Empire')

The season two premiere kicked off with Lucious behind bars and the rest of the gang working to take over his Empire. Except Jamal, of course.

And while it looked like everyone's favorite drama queen, Ms. Cookie Lyon, was about to pull off a hostile takeover with the help of an investor, Lucious showed just how much power he wields.

"I met with Lucious this morning and made a better deal ... Lucious Lyon is Empire. Empire is Lucious Lyon," replied Mimi Whiteman.

Yep. And King Lucious didn't stop there, friends. See, long ago when Lucious and Cookie were still selling drugs, they worked for a man named Frank Gathers.

Frank Gathers, played by the hard-to-take-seriously Chris Rock, is transferred to the same prison as Lucious. And he quickly finds out the reason Cookie was released from prison early was because she snitched on him.

So he did what any reasonable drug kingpin would do: He sent Cookie a disembodied head in a box — from the guy in prison who was trying to warn her Frank new she snitched. Charming, right?

But that turned out to be a fatal mistake. Frank thought he could threaten Lucious' family and get away with it. He also thought he had control over the prison. Cute.

"Kill him. Make it fast and quiet," said Frank Gathers.

"I'm sorry, I think you're confused. ... Kill him. Make it loud and make it long," said Lucious Lyon.

And now that the temporary distraction is out of the way, we can only imagine what Lucious Lyon has planned for Cookie and the gang.

But we've got our eye on Cookie's next move. As Taraji P. Henson noted in an interview with Vulture, "[Cookie] has testosterone. She ain’t scared. Seventeen years in prison, she survived what most people don't."

Lucious Lyon might be showing his power, but if there's anything we learned from season one, it's that Cookie is a queen who won't be trifled with. You can catch new episodes of "Empire" Wednesdays on Fox.