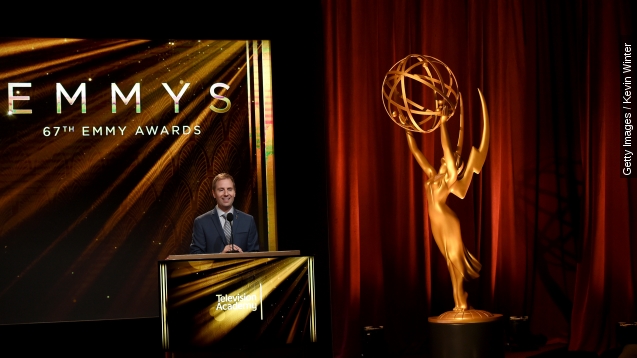 "Modern Family" will compete for a potentially record-breaking sixth win in the in the Outstanding Comedy Series category. But will it be upstaged by HBO's "Veep" or newcomer "Transparent"?

In the Outstanding Drama Series category, "Mad Men" will compete to win in its final year against shows including "Game of Thrones" and "House of Cards."

But the big race to watch will be in the Outstanding Drama Actor category. Most people are wondering if this will finally be Jon Hamm's year to win for his role as Don Draper in "Mad Men."

And this could be the first time an African American has won the lead actress category if "Empire"'s Taraji P. Henson or  Viola Davis from "How To Get Away With Murder" takes home the statuette for Outstanding Drama Actress.

We'll also be keeping our eyes on the Outstanding Comedy Actress race. Julia Louis-Dreyfus is likely to win again, but the veep could be voted out of office from the likes of other front runners in the category like "Nurse Jackie"'s Edie Falco and Amy Poehler in "Parks and Recreation."