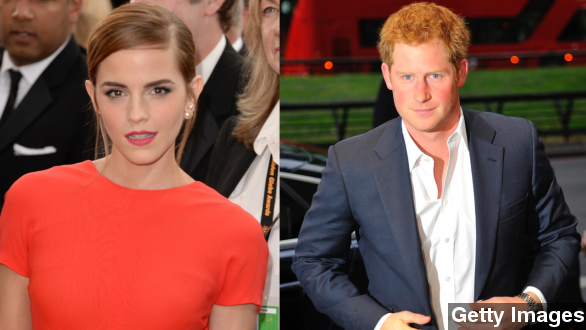 If you thought the rumors of Emma Watson and Prince Harry secretly dating were too good to be true, well, it sounds like you might be right.

The story was first reported by Australia's Woman's Day magazine, which said Harry had mutual friends connect him with Watson. The prince then reportedly "sent Emma a short email saying that he would 'like to get to know her' and invited her out."

The magazine also said the two went on a large group date with a dozen other friends and that the prince is now "smitten."

The pair are both coming off relatively recent breakups. The prince split from girlfriend Cressida Bonas back in April, while Watson broke it off with Oxford University rugby player Matthew Janney late last year.

But the 24-year-old "Harry Potter" star appears to have squashed the rumors, tweeting Sunday morning, "Remember that little talk we had about not believing everything written in the media?!"

Neither Watson's reps nor palace officials have commented on the rumored romance. However, a source told People magazine it was "nonsense."

While Watson has never been seen in public with the prince, she has rubbed shoulders with royalty before. Watson was photographed with Harry's brother, Prince William, during a dinner at Windsor Castle last year.