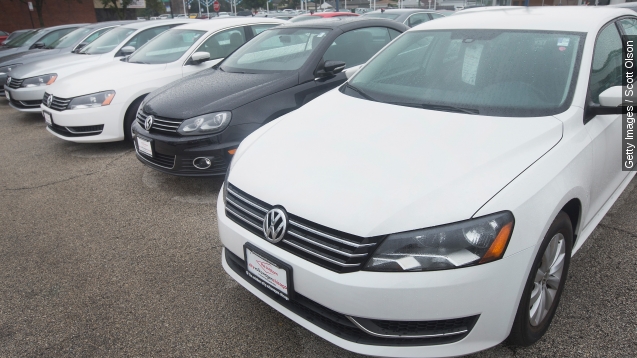 Still reeling from an emissions scandal, Volkswagen watched its November U.S. sales drop 24 percent compared to the same time last year. On top of that, Standard & Poor's dropped its credit rating from A- to BBB+. (Video via Volkswagen)

In September, Volkswagen's CEO apologized after the EPA revealed some of its vehicles had software that cheated emissions tests while still emitting up to 40 times the legal amount of nitrous oxides. The "defeat devices" were in about 500,000 diesel cars dating back to the 2009 model year.

Although the news broke weeks ago, it may have taken longer than expected for Volkswagen to feel the effects in the U.S., and October sales stayed even, according to Auto News. (Video via Volkswagen)

That could be thanks to all the deals and incentives the company extended to car buyers, offering comparable price tags to other auto retailers like Honda and Ford.

But all those sales were without diesel models, which are on hold due to the scandal. To keep up with the demand for discounted cars, dealers had to deplete their inventory. That could have contributed in part to the sales decline in November, as Volkswagen just had fewer cars to sell.

Though sales in America are declining, the effect on the company as a whole remains to be seen. Volkswagen sold almost half a million cars globally in October, just a 5 percent dip compared to the previous year. We still don't know if global sales declined similarly in November. (Video via Volkswagen)