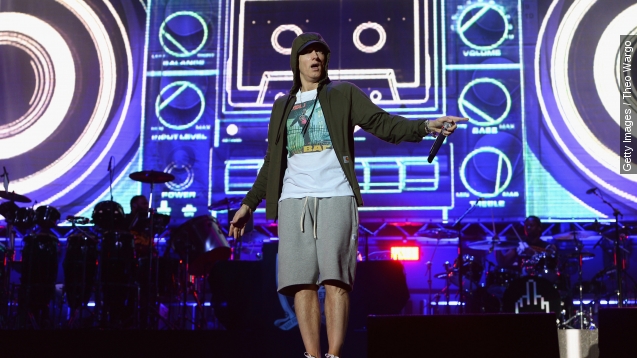 As you may or may not have heard, rapper Eminem did two major interviews this week. Well, maybe major is the wrong word.

Prior to Apple Music's launch the company hyped a Zane Lowe interview with Eminem on Beats 1 radio. TechCrunch said the interview would represent "a pretty substantial 'get' for the station's inaugural programming." (Video via Apple)

And yet there was another interview with Eminem that got way more attention.

"Welcome back to 'Only in Monroe' I'm only Stephen Colbert and we are still in Monroe only. My next guest is a local Michigander who is making a name for himself in the competitive world of music. Please welcome Marshall Mathers."

Not only did the public access program book Eminem — it also got Stephen Colbert to host the entire 41-minute show.

Colbert has been on hiatus since his last "Colbert Report" episode in December of last year. His extra long vacation ends September 8 when he takes over CBS' "Late Show."

So now the real question; which interview was better? Lowe’s 12-minute Beats 1 interview that was well-hyped and researched? Or Colbert’s surprise 20-minute interview, that’s been watched more than 2 million times on YouTube alone?

Well, to start, Beats 1 also uploaded their interview with the rapper and it's been viewed less than 27,000 times. Ouch.

But to be fair, Lowe's interview focused on the music and more specifically the music he wrote for "Southpaw," which is a movie coming out later this month starring Jake Gyllenhaal.

The Beats 1 interview also kept the conversation going and Zane Lowe really did a great job asking questions that proved he'd done his homework ahead of time.

Lowe asks Eminem, "What was it about the story? Because you — after '8 Mile' you did something that very few people, who have success out the gate, do; and you walked away from that idea of film and acting and working in cinema, and you've — I guess — waited for the right project ..."

Colbert did not do his homework — or at least he sure acted like he didn't.