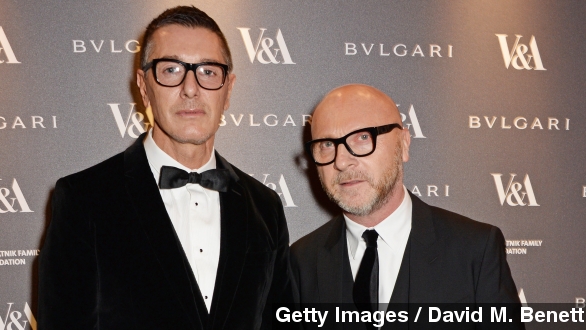 Elton John is steadily gaining support in his boycott of Dolce & Gabbana after the founders of the high fashion label made controversial comments to an Italian magazine.

In an interview with Italian news magazine Panorama, Domenico Dolce and Stefano Gabbana are quoted as saying: "The only family is the traditional one. … No chemical offsprings and rented uterus. Life has a natural flow; there are things that should not be changed."

Elton John responded to the fashion designers' words with a furious Instagram post that calls on a boycott of the famous brand: "How dare you refer to my beautiful children as 'synthetic.' ... Your archaic thinking is out of step with the times, just like your fashions."

And since Elton John's passionate response, others have expressed their disapproval on social media, picking up the #boycottDolceGabbana hashtag. Names like Ryan Murphy, Al Roker and Courtney Love all responded to the article. (Video via Warner Bros. / "The Ellen DeGeneres Show")

It's hard to determine if anyone is really going to boycott the brand based on this incident, but the hashtag has picked up steam on Twitter over the weekend, having been mentioned almost 35,000 times, according to CNN. (Video via Dolce & Gabbana)

Since the controversy blew up online, Dolce and Gabana have responded to the backlash in a statement, saying in part: "We talked about our way of seeing reality, but it was never our intention to judge other people's choices. We do believe in freedom and love." (Video via NBC Universal / "Ellen: The Ellen DeGeneres Show")

And while this particular interview has caught the public's attention, it's not even the first time the designers have come out against non traditional families.

According to the Guardian, Gabbana said in an interview almost 10 years ago that he was opposed to the idea of a child growing up with two gay parents.