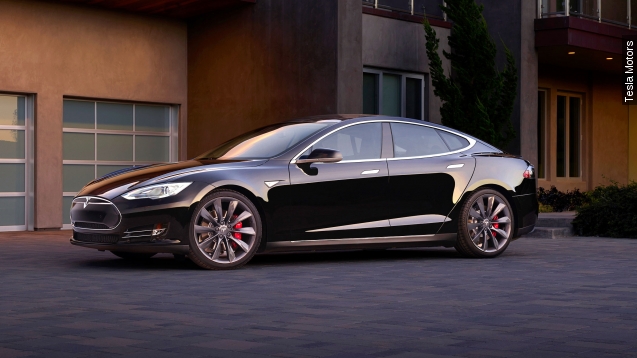 SMS
Elon Musk Reveals When You Can Buy The $35K Model 3 Tesla
By Grant Suneson
By Grant Suneson
September 2, 2015
Tesla Motors CEO Elon Musk has finally let the world know when they can get their hands on a brand-new Tesla without dropping six figures.
SHOW TRANSCRIPT

Tesla Motors CEO Elon Musk has finally let the world know when they can get their hands on a brand-new Tesla that doesn't cost as much as a house. But it's still a ways away. (Video via Tesla Motors)

Wednesday, he tweeted the Model 3 would start production in about two years, and it will only set you back $35,000.

So, why the delay? Right now, the cars run on lithium-ion batteries that each cost about $35,000. But Tesla is building a so-called "Gigafactory" in Nevada where it can make its own batteries for much cheaper.

Lithium ion car batteries aren't exactly a new idea, but the Gigafactory is uncharted territory in the automotive world, so it's tough to pinpoint exactly how long construction will take.

Don't worry too much, though; Tesla is historically good about staying on schedule.

Musk told shareholders earlier this month the more expensive Model X was "on track for start of deliveries in late Q3."

And he kept his word with just a day to spare. Musk announced Wednesday the first of the crossover vehicles would roll off the assembly line Sept. 29.

You probably won't see too many on the road anytime soon, though. With a reported $132,000 price tag, a fully loaded Model X would be one of the most expensive Tesla cars. (Video via Tesla Motors)

But If you just have to spend a small fortune on a car, the Model X is probably a pretty good option.

It is, of course, fully electric and goes from zero to 60 in 3.8 seconds. If that's still not fast enough for you, Tesla offers a "ludicrous speed" upgrade for $10,000. (Video via Tesla Motors)

That upgrade takes your zero to 60 time down to 3.2 seconds. Because let's face it: If you can afford the car and the upgrade, you can also afford the speeding tickets.

Correction: A previous version of this video misstated that Tesla Motors didn't currently offer a vehicle that cost less than $100,000, didn't specify that $132,000 is for a fully loaded Model X and didn't consider features that would make a new P85D more expensive than a Model X. The video has been updated.