Elmo Teams Up With Surgeon General To Promote Vaccinations 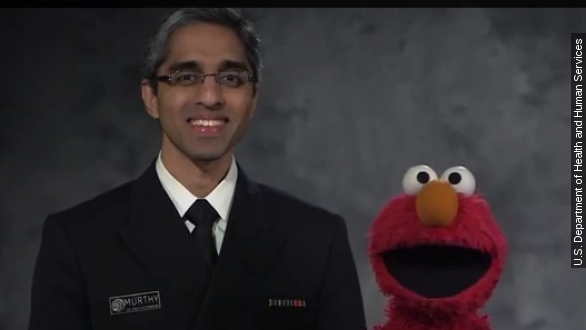 "Elmo will get vaccinated," said Elmo.

The Surgeon General said, "And tell all your friends on Sesame Street to get vaccinated too."

Surgeon General Vivek Murthy has paired up with Elmo to to urge Americans to get vaccinated.

Dr. Murthy has urged parents to get their children vaccinated before. But his recent collaboration with Sesame Street seemed to ramp up the effort a bit.

When Elmo asked, "Why doesn't everybody get a vaccination?"

That video was released the same day California Department of Public Health declared an end to the measles outbreak that started in back December.

HLN reports, "California health officials announced that no new measles cases have been reported for 42 days, that covers two incubation periods for the virus. ... Officials say vaccines are the best protection against measles."

More than 130 cases of the measles was reported to the California Department of Heath. As the spread of the sickness was mostly attributed to a lack of vaccinations, the outbreak really brought the immunization debate to the forefront of conversation.

A study by JAMA showed the areas most affected by the virus had vaccination rates "as low as 50% and likely no higher than 86%."

Since that outbreak we've seen a crackdown on immunizations in a couple states. A school district in Spokane, Washington pulled more than 100 kids out of school Monday for lack of vaccination records.

And in California lawmakers are working to pass a bill that would put an end to the state's personal belief exemption that allows parents to opt out of having their children vaccinated. If Senate Bill 277 were to pass "only children that have been immunized for various diseases, including measles and (whopping cough), [will] be admitted to a school in California. The bill will also require schools to notify parents of immunization rates at their child’s school."

In the past the Obama administration has said it does not support mandatory vaccinations, so the chances of us seeing similar measures on a federal level are slim as of now.

According to the Surgeon General, for kids born between between 1994 and 2013 routine vaccinations could "prevent an estimated 322 million illnesses, 21 million hospitalizations, and 732,000 deaths over the course of their lifetimes."