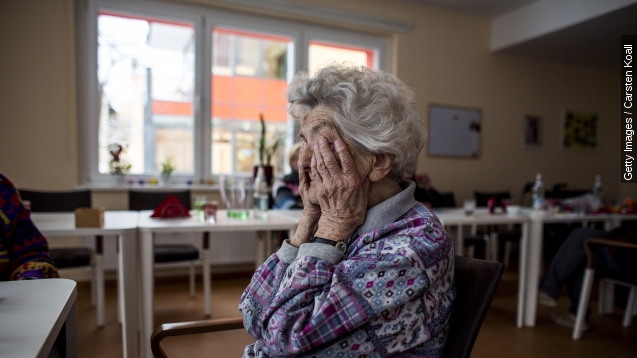 By Ryan Biek
July 22, 2015
Eli Lilly is debuting solanezumab, its new drug designed to cure Alzheimer's. But will the drug fare better than past trials have foreshadowed?
SHOW TRANSCRIPT

On Wednesday, a new drug is being unveiled that scientists say has the potential to cure Alzheimer's, a disease that so far has only had its symptoms treated.

The drug is said to be an antibody to amyloid plaques, a cause of the disease. These plaques are sticky proteins that bind together, blocking brain cells from communicating with one another.

Most of the company's recent test results of the drug have been kept secret, though.

Of the previous treatments tested by the company that were shared, one actually made the disease worse. Then trials in 2012 showed a new version slowed brain deterioration in those who took the treatment during the early stages of the disease. (Video via Eli Lilly and Company)

The director of research at Alzheimer's Research UK said in a press release, "While everyone was disappointed when solanezumab failed to meet its primary outcome measures in two phase III trials, there was evidence that the treatment was slowing down the disease process in people with mild Alzheimer's."

But an analysis by the Alzheimer's Disease Cooperative Study, published in January 2014 in the New England Journal of Medicine, compared the drug to a placebo for that same group — those with mild to moderate Alzheimer's — and found no measurable benefit for the drug.

Today's unveiling by Eli Lilly will at least put the company's research up for comparison. It is possible that the drug's efficacy has been improved in the year and a half since the Alzheimer's Disease Cooperative Study analysis.