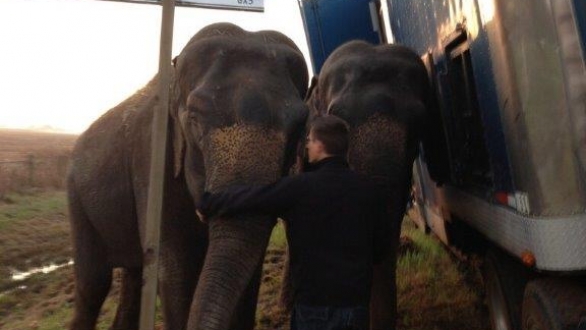 SMS
Elephants Help Keep 18-Wheeler From Toppling Over
By Katherine Biek
By Katherine Biek
March 25, 2015
The Natchitoches Parish Sheriff's Office discovered two elephants keeping a tractor-trailer that had gotten stuck in some mud upright on a highway.
SHOW TRANSCRIPT

When the Natchitoches Parish Sheriff's Office responded to a call about a tractor trailer getting stuck in some mud on the shoulder of a Louisiana interstate...

it certainly didn't expect to see two elephants actually keeping the trailer from toppling over completely.

You certainly don't see that everyday.

A reporter for The Town Talk says the 18-wheeler had become stuck in some mud Tuesday morning. The elephants were being transported in that truck.

According to the sheriff's office, the elephants were being transported from Florida to the Dallas, Texas area for a circus performance.

The elephants though looked like they were more than holding their own when keeping the truck upright.

National Geographic reports they're incredibly strong creatures. Their trunks can lift 600 pounds all by itself because of the 100,000 muscles it contains.

The sheriff's department didn't end up issuing any citations to the driver, and a tow company was contacted to help get the tractor-trailer out of the mud.

This video contains music from Bensound / CC BY ND 3.0