An Elephant Tranquilizer Might Be Making The US Heroin Epidemic Worse 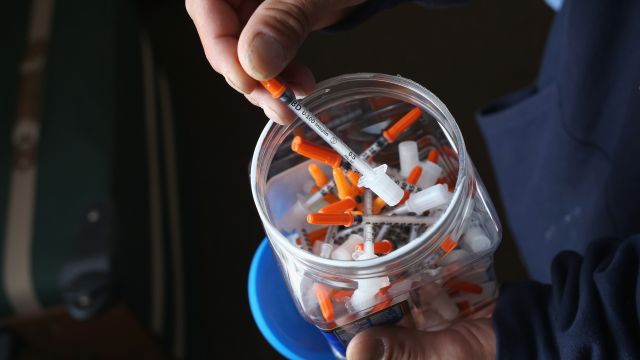 SMS
An Elephant Tranquilizer Might Be Making The US Heroin Epidemic Worse
By Lindsey Pulse
By Lindsey Pulse
September 11, 2016
Carfentanil is designed to knock out animals like elephants and moose, but drug dealers are lacing heroin with it.
SHOW TRANSCRIPT

An elephant tranquilizer 10,000 times the strength of morphine might be making the U.S. heroin epidemic worse.

The tranquilizer, called carfentanil, is a synthetic version of the human drug fentanyl — an opioid used to treat severe pain.

Symptoms of fentanyl include shallow breathing, slowed heart rate and confusion, among others.

But carfentanil can be fatal to humans. Just a couple milligrams can knock out large animals like elephants and moose.

Over the past several months, the drug has been linked to many deadly overdoses in humans. Officials said the drug first appeared in central Ohio in July.

Since Aug. 19, there have been about 300 heroin overdoses in the Cincinnati area — 174 of those happened in a six-day period.

In some cases, users don't even realize they're taking carfentanil. Dealers are reportedly selling the drug as heroin or lacing heroin with the tranquilizer. The opioid is cheaper and stronger than heroin, so dealers can make their supplies last longer.

Virginia, Indiana and Kentucky have also seen a spike in overdoses believed to be caused by carfentanil. Canadian officials are also starting to see it come across the border.