Electronic Music Pumps Up Jams, Festivals And The Economy 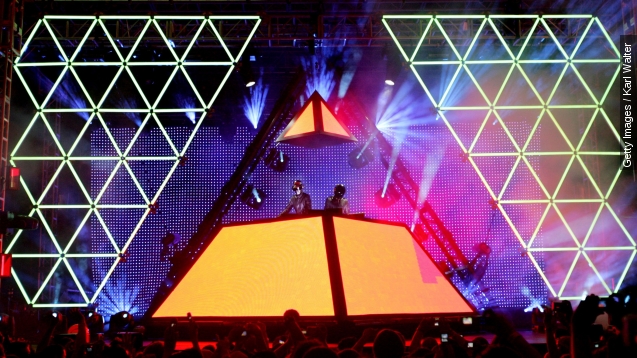 Electronic dance music has exponentially grown in popularity since the Coachella music festival first opened its gates in the summer of 1999.

Meet two of the world's top DJs, Tiesto and Calvin Harris, who reportedly bring in casual incomes anywhere between $28 million and $66 million. But the option for artists like them to go mainstream wasn't always there, so in a lot of ways, they can thank the Internet.

Electronic dance music that started in underground Chicago, New York and Detroit nightclubs helped propel the genre into the era of the Internet and social media. Before the Internet, house music parties were spread by word-of-mouth, which was basically a precursor to Twitter.

As interest grew, DJs and producers like Armin van Buuren, Paul Oakenfold and Tiesto began music podcasts — like van Buuren's "A State of Trance" — which connected artists with an even bigger global audience.

But Ticketfly speculates the sense of community festival-goers experience at events like Ultra Music Festival and Electronic Zoo also tend to make people purchase single tickets rather than group tickets.

But the performance is just as important as the fanbase. While they are first and foremost DJs, they're also "audio-visual entertainers," as The Guardian describes them.

When Daft Punk performed at Coachella in a light-up pyramid timed to music in 2006, it seemed to be a reinvention for the genre — taking Daft Punk mainstream and sparking an interest in seeing elaborate sets at festivals.

But even more staggering than the incredible light performances at festivals — like Belgium’s Tomorrowland and Austin, Texas', Austin City Limits — is the amount of money top festivals generate.

In 2012, Miami's Ultra Music Festival raked in $79 million for Miami-Dade County, which included $50 million in GDP contributions, according to a study commissioned by the festival.

Similarly, in 2013, Coachella poured a reported $254 million back into Indio, California's, economy while creating thousands of temporary jobs during the fest.

In the first year of the sister festival to Belgium's premier EDM festival Tomorrowland, TomorrowWorld in Atlanta, Georgia, had an economic impact of about $85 million — $70 million of that went to the city.

For a comparison, when Atlanta hosted the 2013 NCAA Final Four, the estimated economic impact was also $70 million.

The high popularity of these festivals allows for higher ticket prices. A three-day pass to this year's Coachella costs $375 — or $899 for VIP tickets. Even with steep ticket prices, the festival saw its fastest sellout: Tickets were gone 40 minutes after they went on sale.

Simple math shows the enormous success and economic impact of these festivals — just multiply the ticket price by the 134,000 attendees to something like Las Vegas' Electric Daisy Carnival.