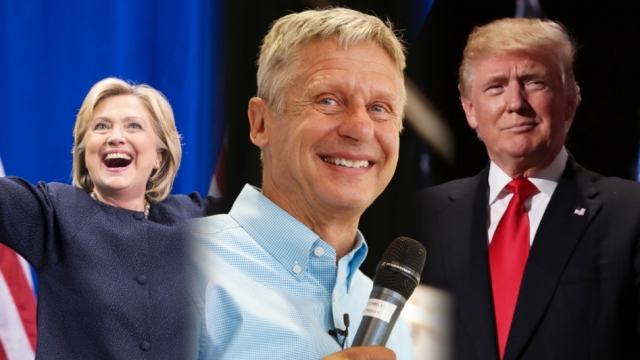 Oh, New Mexico. The Land of Enchantment, home to the Roswell UFO incident and possibly the reason for a potential electoral deadlock?

OK. Admittedly, it's pretty unlikely. But, based on all the surprises that 2016 has given us, it's worth a look, right?

That's the conclusion of statistician and FiveThirtyEight founder Nate Silver, who took a look into the implications of a new Albuquerque Journal poll. The poll shows Libertarian candidate and former New Mexico governor Gary Johnson with 24 percent of the vote.

Clinton leads Trump and Johnson in the poll. But when Silver factored the poll into his election forecast, it dropped Clinton's likelihood of winning the state by a few percentage points — from 85 percent to 82 percent.

No big deal, right? Not so fast, according to Silver.

Silver's model gives Johnson a two or three percent chance of winning his home state. If Johnson won the state, it could mean neither Clinton nor Trump would get the 270 electoral votes needed to win the presidency.

So what happens then?

The House of Representatives would elect the president. Each state delegation would get one vote, and they would choose from the three candidates with the most electoral votes.

The Senate would elect the vice president. Each Senator would get a vote and would choose between the two candidates with the most electoral votes.

But, as Silver said, "plausible is a long way from likely."

He writes that there is a 0.15 percent chance of both Clinton and Trump failing to reach 270 and Johnson winning New Mexico.