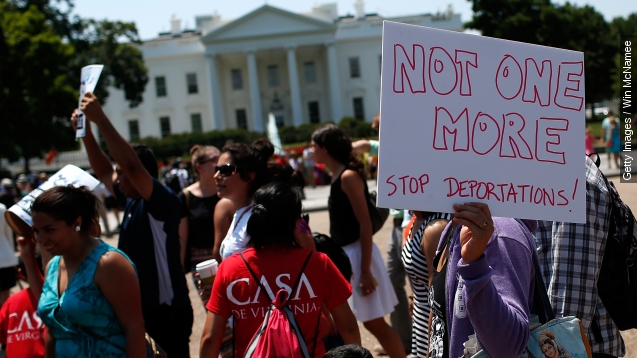 Immigration has once again become one of the central issues of yet another campaign cycle.

But it's been more of a talking point for the GOP field, and that's largely down to one man. (Video via Fox News)

Donald Trump has single-handedly brought the issue of illegal immigration to the forefront.

The biggest reason why it wasn't there to begin with is that illegal immigration has actually been down.

Add to that the fact that it's been two years since the most serious effort at immigration reform, which failed, and almost a year since President Obama's executive action on immigration, and it's easy to understand why it wasn't in the spotlight. (Video via PBS, The White House)

But Trump's rhetoric has been part of his overwhelming success, which has driven his competitors to talk about the issue as well. (Video via C-SPAN)

"Our federal government is not supporting the local authorities at the border, and it's disgusting," Ben Carson told CBS's "Face the Nation."

Chris Christie suggested, "We need a system that tracks you from the moment you come in, and then when your time is up, ... then we go get you."

And Trump has brought up issues within the debate a few analysts could've forecasted before he joined the race — issues like birthright citizenship.

"You're going to find they do not have American citizenship. We have to start a process where we take back our country," Trump told Fox News' Bill O'Reilly.

And other candidates have followed suit.

"In terms of actually changing the laws or potentially even the Constitution, I'd certainly support that when it comes to changing for folks that are here illegally," Bobby Jindal told The Des Moines Register.

Aside from uniformly criticizing Trump and pledging reform, the Democratic field hasn't really touched on the issue as much as its Republican counterpart. (Video via MSNBC)

"Today not a single republican candidate, announced or potential, is clearly and consistently supporting a path to citizenship," Hillary Clinton said in Nevada.

But the issue has already faded somewhat, and it wouldn't be surprising if, should Trump fall out of the race, talk of immigration followed.