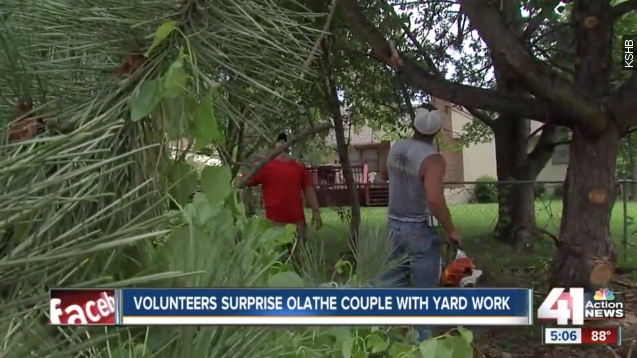 "It's people like this who give you more faith in the community," Olathe, Kansas, resident Perry Moore told KSHB.

This is one of those stories that makes us feel good about our fellow humans.

Some neighbors started talking about helping out an elderly couple whose yard needed serious sprucing up. And as Newsy's partners at KSHB found out, that turned into so much more than just talking.

"We got lawn bag donations, chainsaws, people showing up with equipment," one volunteer said.

"And resulted in a testament to the human spirit," the KSHB reporter said.

Perry Moore and his wife have lived in their Olathe, Kansas, home for more than 20 years. They have 12 grandchildren and 7 great-grandchildren, but none of them could play in the backyard ... until now.

"Moore's age and medical condition makes it next to impossible for him to care for his backyard," the KSHB reporter said.

"It's hard to have to depend on other people, but when it came to it, you had to kind of suck it up and swallow your pride," Moore said.

A local radio station and Twitter helped spread the word, and neighbors and volunteers showed up in droves to clean up the yard.

"It rained three separate times, nobody stopped. It was pretty awesome," one volunteer told KSHB.

And neighbors who couldn't physically help out volunteered their yards for bulk pickup. Moore is touched.

"From the bottom of our heart, we appreciate it," Moore said.