El Nino Effects Are Already Severe And They May Get Worse 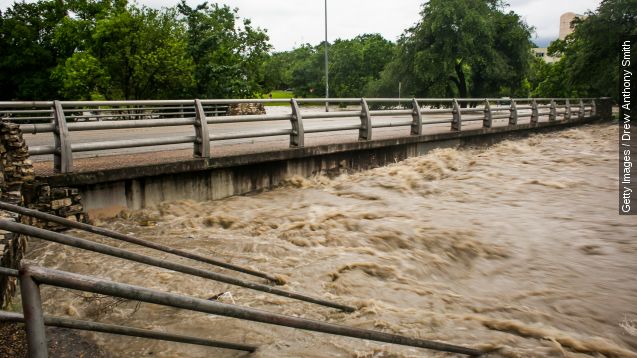 "The force of the water that's being let out and how deep and wide it is in areas that I've never seen water in," Oklahoma Gov. Mary Fallin said.

"If your local elected officials tell you to evacuate, it is essential that you heed those warnings," Texas Gov. Greg Abbott warned on KPRC.

"The water got right up to this lip on the counter," one witness told CNN.

The record floods that hit Oklahoma and Texas this spring caused millions of dollars in damage and took dozens of lives. (Video via KJRH)

A KTRK reporter said: "The body of a 50-year-old woman was also found on Ardmore. The body of another man was found late this evening in the Brays Bayou."

And while the incidents were unusual, scientists say they weren't a fluke. Instead, they may be a sign of things to come. (Video via KXAN)

El Nino is a phenomenon that periodically brings warmer water temperatures in off the Pacific causing a host of effects across the Americas.

The scientists argue a warmer atmosphere has made those effects more severe, like causing heavier-than-usual rainfall in the southern Great Plains. (Video via KGTV)

Add to that the prediction that this year's El Nino could be the worst in 50 years, and it gets easier to understand the extent of the flooding. (Video via KGTV)

2011's La Nina, El Nino's cold phase, was the warmest on record and also led to weather extremes, including more severe tornadoes in the Midwest and increased hurricanes in the North Atlantic. (Video via CBS)

Then, like now, the warming atmosphere was credited with amplifying the typical effects of La Nina.

And yet planning for the effects of climate change isn't popular with the conservative political establishment in states like Texas and Oklahoma. (Video via Austin American-Statesman, KXAN)

This video includes an image from NASA and Getty Images and music from Chris Zabriskie / CC BY 4.0.