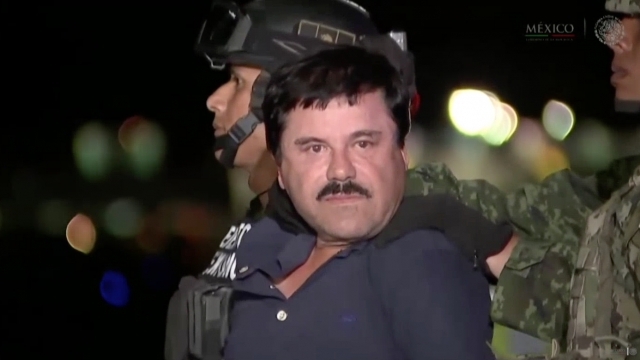 SMS
El Chapo's Daughter Claims He Visited Her US Home While On The Run
By Cliff Judy
By Cliff Judy
March 5, 2016
Rosa Guzmán Ortiz told The Guardian her father visited her California home twice in late 2015 but didn't know how he crossed the U.S. border.
SHOW TRANSCRIPT

The escape and recapture of drug lord Joaquín "El Chapo" Guzmán has seemingly been one embarrassment after another for the Mexican government. We might have another one for you, and now, the U.S. border control might have reason to blush.

It seems Guzmán, arguably one of the most wanted men in the world, sneaked into the U.S. twice after his escape from a Mexican prison.

That's according to Guzmán's daughter, who gave an exclusive interview to The Guardian. El Chapo escaped from a Mexican prison for the second time last summer and was on the run for about seven months before he was recaptured.

His daughter claimed Guzman wouldn't share how he crossed the border, just that he visited her California home twice in late 2015 while on the run.

It should be noted The Guardian couldn't independently verify Guzmán entered the U.S.

As head of the Sinaloa cartel, Guzmán was named the "world's most powerful drug trafficker" in 2012 by the U.S. Treasury Department. The Mexican government has hailed his arrests as massive progress in the fight against the country's brutal drug war — going so far as to not just hold press conferences for the arrests of "El Chapo" himself but also his lieutenants and major distributors.

Which made Guzmán's repeated prison escapes — the most recent in a tunnel dug under his cell — all that more deflating for the country's leaders.

In recent weeks, Guzmán's attorney has said the drug lord is willing to waive extradition rights and plead guilty to charges in the U.S. in exchange for promises of serving time in a medium-security prison.

This video includes clips from the Government of Mexico.