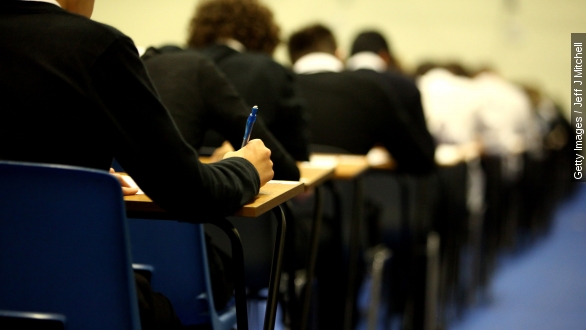 Eighth-graders are struggling with U.S. history and civics, according to a new educational assessment.

At the same time, only 3 percent or less of eighth-graders taking these assessments scored at an advanced level.

The assessment doesn't look at a particular school or set of students. Instead, it refers to itself as a "representative-sample assessment," where schools across the country are chosen to participate in the exams by the National Center for Education Statistics. Students in the target grades are then randomly selected to participate. (Video via The Nation's Report Card)

There are three achievement levels a student can get on these exams: basic, proficient or advanced. Students scoring at a proficient level means they "have demonstrated competency over challenging subject matter."

The last time both assessments were administered was back in 2010 and what's a bit alarming is the average scores haven't really improved.

In 2010, 22 percent of eighth-graders were at a proficient level in civics. Only 1 percent scored at the advanced level.

Overall the results are troubling according to president of the National Center on Education and Economy, who told The Wall Street Journal, "These are the kind of scores that represent what students know going into higher education and the workforce. All of this is bad news."

The Washington Examiner reports the way students are learning these subjects are changing. Fewer and fewer are reading textbooks and instead are spending more time using computers and watching videos in class.

On how to improve these scores, Education Week spoke with the National Council for the Social Studies which stated some states are currently updating their framework for the subject. (Video via Teaching Channel)

The next time these specific subject matters will be tested again by the National Assessment Governing Board will be in 2018.