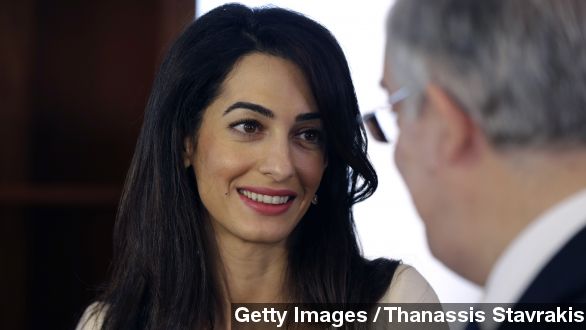 Egypt's government says human rights lawyer Amal Clooney can come to the country "whenever she wants."

But as cheerful and inviting as that sounds, the relationship between the two parties is a bit more complicated.

In an interview published Friday, Clooney told The Guardian she was preparing a report for the International Bar Association earlier this year critical of Egypt's government, saying the judicial system should be more independent.

But officials reportedly found the information so controversial they threatened to arrest her and her team should they publish the report.

She told The Guardian, "When I went to launch the report, first of all they stopped us from doing it in Cairo. They said: 'Does the report criticise the army, the judiciary, or the government?' We said: 'Well, yes.' They said: 'Well then, you're risking arrest.'" (Video via International Bar Association)

But, on Sunday, Egypt's government denied this ever happened. Egypt's Interior Ministry told the state-run news agency MENA those claims are "baseless" and Amal Clooney was free to come to the country "whenever she wants." (Video via BBC)

Currently, Clooney is representing one of the three Al Jazeera journalists jailed in the country on charges of conspiring with the Muslim Brotherhood to broadcast false reports. The men were convicted in June, but were granted a retrial last week.

The original ruling by Egyptian judge Mohamed Nagy Shehata was highly controversial. Human Rights Watch criticized the trial, claiming there was "no evidence indicating any criminal wrongdoing" committed by the Al Jazeera journalists.

Clooney's report in February recommended Egyptian officials no longer handpick judges for politicized cases. She has not publicly announced when she'll go back to the country.