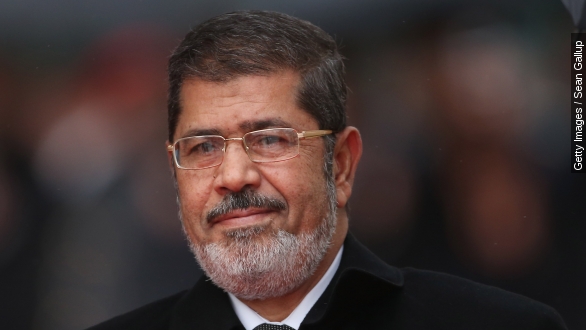 SMS
Egypt's Morsi Escapes Life Sentence, Gets 20 Years In Prison
By Sebastian Martinez
By Sebastian Martinez
April 21, 2015
Mohamed Morsi has been sentenced to 20 years in prison, finding him guilty of ordering the torture and detainment of prisoners during his presidency.
SHOW TRANSCRIPT

Egypt has sentenced its first democratically elected president to 20 years in prison.

Mohamed Morsi faces the sentence after a court found him guilty of ordering the torture and arrest of protesters during his presidency. (Video via ERTU)

Those charges stem from violent clashes between Morsi supporters and opponents in 2012, before Morsi was ultimately ousted by the military. (Video via The New York Times)

Morsi was ousted in 2013 under the direction of current President Abdel Fattah el-Sisi, who was then chief of the armed forces. (Video via BBC)

Since taking power, el-Sisi has targeted the Muslim Brotherhood, the Islamist group Morsi was a part of, and branded it a terrorist organization. (Video via ERTU)

Dozens of people died in clashes between the Brotherhood and opponents in 2012, and then hundreds of Brotherhood protesters were killed in 2013 when the government cracked down on protesters. (Video via Fox News)

The crackdown on protesters and freedom of speech under el-Sisi has drawn criticism internationally, and the U.S. suspended its military aid to the country in the fall of 2013, before reinstating it last month. (Video via Press TV)

Egyptian observers have called into question the validity of the government's trials.

Yehia Ghanem told Al Jazeera, "Such cases being made up and the trials and the way they are conducted, it's really unbelievable."

Morsi's legal representation says it will appeal the sentence. (Video via CCTV)