Egypt Retaliates With Airstrikes On ISIS 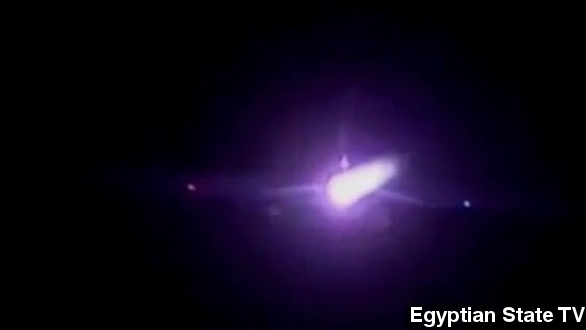 Egypt hit ISIS targets with airstrikes Monday to quote "avenge the bloodshed and to seek retribution."

This is the footage Egyptian state TV aired, showing jets preparing to take off.

It didn't take long. Hours earlier ISIS militants released another execution video in which they claimed to have killed 21 Egyptian Coptic Christian hostages.

"Egypt reserves the right of retaliation and with the methods and timing it sees fit for retribution," said Egyptian President Abdel-Fattah el-Sissi in a televised speech after the video's release.

And where ISIS is reportedly gaining a foothold. The group's magazine says ISIS can “easily capture Coptic crusaders” in Libya.

That's where the airstrikes hit — in Libya's eastern city of Derna. In the past, Egypt had been accused of supporting air strikes in Libya, but its government had denied that.

In the background, France is planning to sell Egypt 24 advanced fighter jets in an almost $6 billion deal. The jets have been used in airstrikes on ISIS. (Video via euronews)

That was a move viewed with some skepticism though, as Egypt already has hundreds of fighter jets at its disposal.

In a televised speech after the latest execution video, Egyptian President Abdel Fattah el-Sissi said Egypt — and the world — were "in a fierce battle with extremist groups." According to Egyptian state TV, as many as 50 militants were killed in the recent strikes. Those numbers would be difficult to verify.