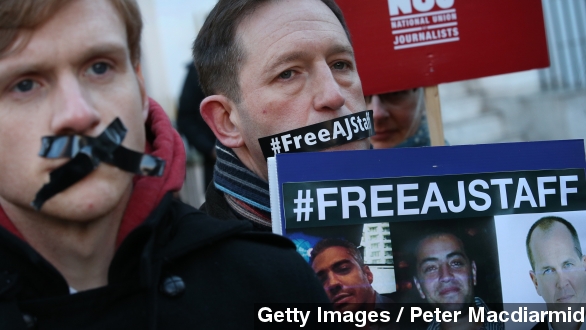 A step toward freedom, if not the step family and coworkers of three imprisoned Al Jazeera journalists were hoping for.

Egypt's highest court ordered a retrial of Peter Greste, Mohamed Fahmy and Baher Mohamed Thursday. This is file video of the three in court since journalists on scene say they weren't allowed into the courtroom for this latest appeal until it was already finished. (Video via CCTV)

The three were arrested in December 2013 and accused of aiding the now banned organization Muslim Brotherhood and spreading false news, something the journalists and Al Jazeera have vehemently denied.

A judge gave Greste and Fahmy seven years in prison after their convictions last June while Mohamed received a 10-year sentence. The BBC now reports their retrial is expected to begin within a month.

The journalists' family members had hoped the three would be released on bail, but admitted to reporters their attorneys had already correctly predicted that wouldn't happen. Much of the journalism world has avidly followed the case. (Video via ABC Australia)

Throughout its employees' time behind bars, Al Jazeera has released promos with the hashtag #FreeAJStaff and the slogan "Journalism Is Not a Crime." Just Monday, the network recorded another minute-long clip from its studio set with the journalists' coworkers silent and holding signs calling for their release.

Outside observers, especially those within the journalism industry, have always interpreted the reason for the journalists' arrest as political. Al Jazeera is based in Qatar, which many Egyptians see as a base for Islamist supporters of the Muslim Brotherhood. By extension, they see Al Jazeera as a mouthpiece for the organization.

The arrests also came during a widespread, violent and much-criticized crackdown on the Muslim Brotherhood in Egypt. The country has since sentenced hundreds at a time to death for their alleged relationship with what Egypt calls a terrorist organization. (Video via Euronews)

Al Jazeera's news director appeared on BBC Thursday morning saying Egypt's handling of this case has not affected how the network's journalists do their jobs in the region.

"If we do that, then you can say goodbye to journalism," Salah Negm told BBC. "No, it didn't and it shouldn't. We have conducted ourselves by the book in Egypt and in Syria and in Libya and in Somalia."

In July, Egyptian president Abdel Fattah el-Sisi said he wished the journalists had simply been deported instead of jailed.