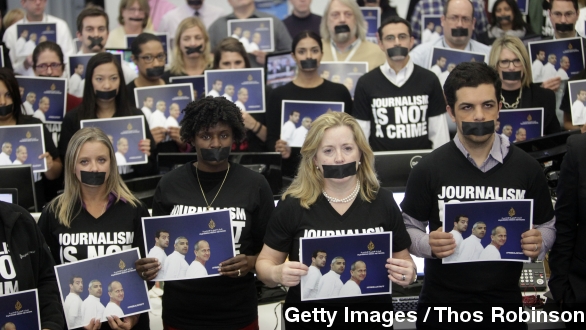 The remaining two Al Jazeera journalists jailed in Egypt are free — for now.

This comes less than two weeks after authorities deported the journalists' Australian colleague Peter Greste back home. (Video via The Guardian)

Greste congratulated his two colleagues on Twitter, writing: "This is a huge step forward. Not time to declare it over, but at least you get to go home!"

The three were first detained in December of 2013, and the following June were convicted of working for the Muslim Brotherhood, a political movement that Egypt's military-backed government classifies as a terrorist group. (Video via BBC)

The journalists denied these claims, as did Al Jazeera, and the international community largely condemned the court proceedings as well as the sentencing: seven years for Greste and Fahmy, and 10 for Mohamed. (Video via Al Jazeera)

Thursday was the first day of a retrial authorities ordered in January, and despite releasing the two remaining men on bail, it's not clear how the court will proceed.

The Egyptian government has come down hard on Egyptian journalists and political opponents alike since it took power in 2013's military coup. (Video via RT)

Although the two men were released, their retrial is set to resume on Feb. 23.