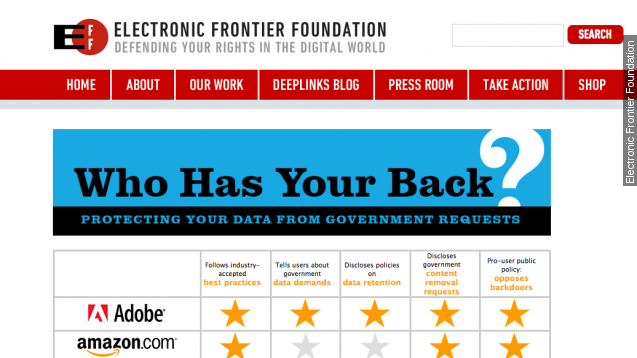 This week, the Electronic Frontier Foundation released its 2015 privacy scorecard, which ranks tech companies based on their privacy practices.

Apple, Dropbox and the Wikimedia Foundation were among the nine companies on the five-star short list. It's an accomplishment, considering these are tougher standards than those the EFF used when it launched the scorecard in 2011. (Video via Apple, Dropbox)

"The criteria we used to judge companies in 2011 were ambitious for the time, but they've been almost universally adopted in the years since then."

Since the Snowden revelations, companies have been stepping up privacy protections. (Video via The Guardian)

Some big names in tech started calling on the government for surveillance and encryption reform as early as 2013. (Video via The Washington Post)

And they're still at it. In May and in June of this year, technology coalitions signed letters urging the Obama administration to prevent backdoors or any other intentional weakening of encryption.

Also this year, Reddit, Snapchat and Amazon all released their first transparency reports.

The EFF points to this new culture of data awareness as one reason "more and more companies are voluntarily speaking out about government data requests."

Which is great! It would be nice if the EFF's scorecard weren't even necessary in the first place. But some companies still lag behind their peers.

AT&T and WhatsApp, for example, got the lowest scores: AT&T only met the "best practices" requirement, and the EFF says WhatsApp opposes encryption backdoors, but that's it. (Video via AT&T, WhatsApp)

And even scorecard veterans can use a watchdog. As one EFF attorney told Wired, with Google's great reach comes great responsibility. (Video via Google)

"[Google] has data on all of us. And because of that they really need to try harder to meet the best practices that other companies in the field have met."

In other words, there's always room for improvement. The EFF's full report card is available on its website.

This video includes music by Bakoda / CC BY NC SA 3.0.