Eddie Murphy Performs Live For The First Time In 28 Years 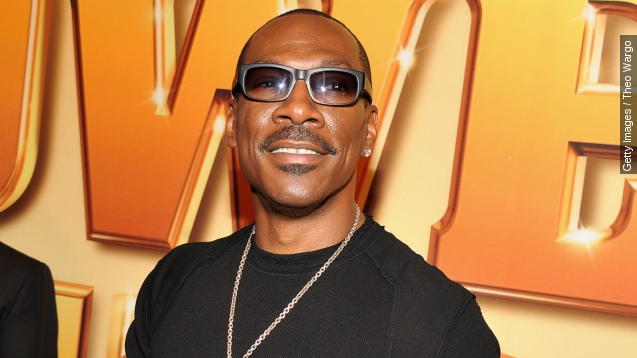 Fans of Eddie Murphy have been waiting nearly three decades to hear him perform live onstage.

"It's still a risky business to be the first black president. You'd have to give speeches like this," Murphy said, pretending to dodge bullets during a 1982 performance on "The Tonight Show." (Video via YouTube / Johnny Carson)

But Sunday night at the Kennedy Center, Murphy was back on stage telling jokes — for the first time in 28 years.

Murphy was in D.C. to receive the annual Mark Twain Prize for American Humor. Big names turned out for the event, like Dave Chappelle, Arsenio Hall and Tracy Morgan.

Murphy joked for about five minutes at the sold-out venue, and his trademark edginess seemed to be as strong as ever. His first joke? An impression of Bill Cosby refusing to give back his Mark Twain Prize, which Cosby received in 2009. (Video via The Washington Post, ABC)

Murphy also joked the prize should really be called an award because he said, "When it's a prize, there's usually money involved."

Murphy’s largely been out of the spotlight in recent years, but his status as a comedic icon is unchallenged. (Video via Warner Bros.)

Murphy first gained recognition on "Saturday Night Live" in 1980 when he was just 19, rescuing the show from slumping ratings with bits like "Mr. Robinson’s Neighborhood." (Video via NBC / Saturday Night Live)

"You know, Christmas is a special time in Mr. Robinson's neighborhood. It's a time for giving," Murphy said on "SNL" in 1984. "And look what Mr. Landlord gave me! It's an eviction notice!"

Since then Murphy has performed stand-up at packed arenas and acted on the big screen in numerous films, from "48 Hours" to "Trading Places" to "Shrek." (Video via Paramount Pictures)

"You really need to get yourself a pair of jammies!" Murphy said as the voice of Donkey in the film "Shrek the Third."

Murphy's performance at the Kennedy Center will broadcast Nov. 23 on PBS.