ECB's Lifeline To Greece Is Still Just A Stopgap 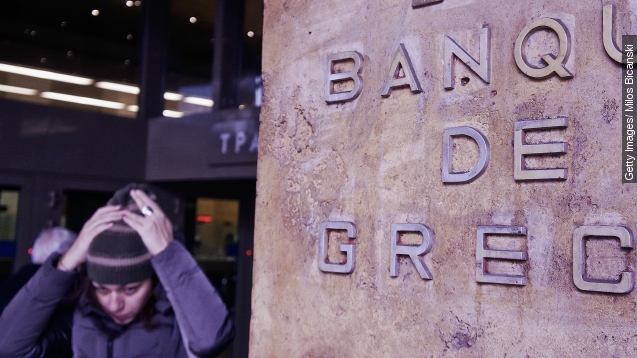 As Greece continues to walk a fishing-line tightrope across the Grand Canyon of Bankruptcy, the European Central Bank approved more emergency funds to the country's lenders.

Withdrawals on Greek bank accounts have accelerated as the country has failed to successfully negotiate a bailout deal, prompting fears of a bank run that would further devastate the country's financial system. (Video via The Guardian)

The ECB's emergency liquidity is meant to keep the country above water while a bailout deal is negotiated, but it's still unclear exactly how much the ECB pumped into the system. More than 3 billion euros have been withdrawn since Monday.

Some media outlets are reporting that the latest round of liquidity funds from the ECB is equal to about 3 billion euros, while others report that the number is lower and more short-term.

The bank has been repeating this process as the Greek crisis has worsened. On Monday, before the latest funding, ECB President Mario Draghi said it's provided lenders with 118 billion euros in 2015.

The ECB is also one of Greece's primary creditors, so it has an interest in making sure the country doesn't collapse. The bank owns nearly 20 billion euros in Greek government bonds.

In bailout negotiations, Greece's leadership has refused to adopt further budget restrictions to qualify for more money from creditors, which has led to a stall in the talks. (Video via Syriza)

Greece's next big payment is due June 30 to the International Monetary Fund. A default on that would likely force Greece to stop using the euro, which would wreak havoc on the banks that the ECB currently has on life support. (Video via Al Jazeera)

That, in turn, may lead to the ECB finally pulling the plug.