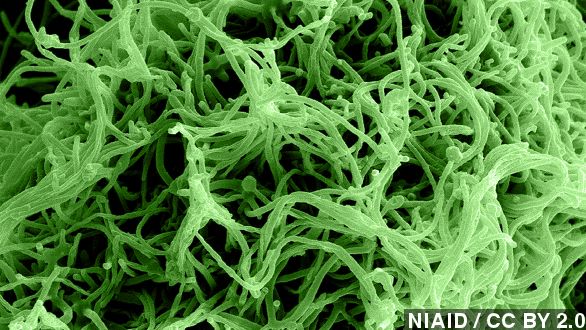 As the medical community scrambles to find ways to combat the deadly Ebola virus, researchers found new clues to just how the deadly virus messes with the immune system — clues that could lead to future treatments.

When an infection enters the body, proteins called interferons send an alert to the body's antiviral immune system that something bad is happening. That message carrier, labeled "STAT1," gets a kind of super highway or "emergency access lane" to deliver the alert to the immune system's nucleus as quickly as possible, so the body can start battling the virus. Now, here's where the researchers say Ebola is different. The deadly virus comes equipped with a protein called VP24 which zeros in on STAT1 and blocks it from rolling down that super highway, thus keeping the immune system in the dark, so it can't put its defense system in action.

Lead author and Washington University professor Dr. Gaya Amarasinghe said in a university statement, "What we see in this particular case is that interferons do not function in the normal way." And he says VP24 is the culprit. "What we found was that it very specifically blocks this one protein that's important for the host signaling."

Study co-author and professor at Mount Sinai University Dr. Christopher Basler told The Huffington Post he plans to keep testing forms of the VP24 protein to see what happens to the virus.

"If we can use the information in this study to develop drugs that would block the function of this viral protein, we can make the body's natural defense more effective and beat the infection that way."

The new findings come as the World Health Organization continues to look for ways to contain West Africa's deadly outbreak. Just Tuesday, it approved the use of experimental drugs in region.

MAPP Biopharmaceutical sent the entire remaining supply of its ZMapp serum to the beleagured region. And the Canadian government donated up to 1,000 doses of its own unlicensed drug to WHO on Tuesday. (Video via NBC)

WHO's decision to allow drugs that haven't gone through clinical trials raised some serious ethical questions. One noteworthy headline from Bloomberg: "Who Gets It?"

According to Bloomberg, as of Wednesday, WHO still hasn't decided how it will administer them.

The new research on Ebola's VP24 protein will appear in the Aug. 13 issue of the scientific journal Cell Host & Microbe.