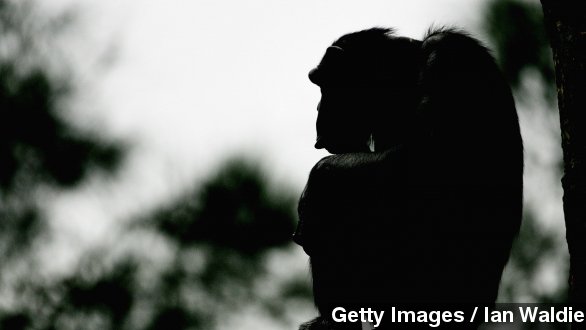 We've seen the devastation Ebola has inflicted upon the people of West Africa, but a different population has been hit hard as well.

Experts estimate Ebola has wiped out one-third of the world's gorillas and chimpanzees. (Video Via Yale University)

This shouldn't necessarily come as a surprise. Humans, gorillas, and chimpanzees are all similar genetically, so it makes sense that we're susceptible to many of the same diseases. (Video Via BBC)

The Telegraph points out apes often spread the highly contagious disease among themselves through touch, leading to mass outbreaks. (Video via Animal Planet)

The mortality rate for Ebola is 95 percent in gorillas and 77 percent in chimpanzees.

Conservationists worry Ebola, combined with human poaching and loss of habitat, could lead to extinction for gorillas and chimps.

A writer for The Conversation said, "If we do not act fast, these may prove to be the last decades in which apes can continue to live in their natural habitat."

Experts warn if apes were to become extinct, forest life would be dramatically affected. The animals inadvertently distribute seeds and pollen in their habitat, and their absence could greatly threaten the biodiversity of their forest. (Video via National Geographic)

An Ebola vaccine for apes has been created, but its effectiveness has not been fully tested.

Conservationists are calling for greater resources to continue to develop the ape vaccine, but some are concerned the work could be seen as competing with the human vaccine — which is also still in its experimental phase. (Video via TV2Africa)

Experts say a long-term solution to the dwindling ape numbers is working to restore forest habitat, since larger forested areas would lessen contact between the animals and reduce spread of the disease.