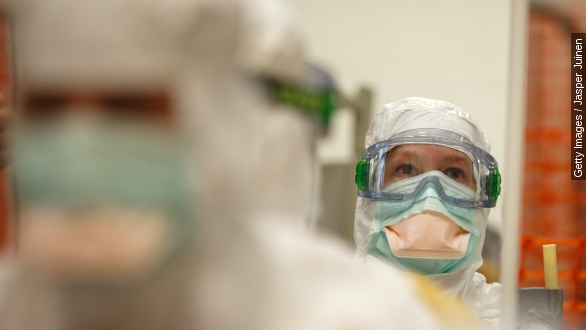 SMS
Ebola Found In Survivor's Eye Months After Treatment
By Jasmine Bailey
By Jasmine Bailey
May 8, 2015
Dr. Ian Crozier was diagnosed with Ebola while working in West Africa last year, but months after his treatment, doctors found the virus in his eye.
SHOW TRANSCRIPT

​A doctor who contracted Ebola in September while working in West Africa was given the all-clear after being treated at Emory University.

Months later he was back in the hospital. Teeming inside his eye: Ebola.

"We need to understand this a little more. We think we're getting 10 years of strain-specific antibodies," said Dr. Ian Crozier.

This video was published in December of last year, and it's pretty clear to see Dr. Ian Crozier has two blue eyes. Due to the infection, his left eye turned green.

"It felt almost personal that the virus could be in my eye without me knowing it," Crozier told The New York Times.

The New England Journal of Medicine originally published the news of Crozier's condition. According to the journal, in December 2014, Crozier had 20/20 vision in his left eye. Within five days of symptoms, his vision had deteriorated to 20/60.

Other than eye trouble, Crozier reported symptoms of joint and muscle pain, fatigue and hearing loss — health problems survivors in West Africa are also facing. There are unconfirmed reports of hearing loss and blindness as well.

There's not a lot known about what types of struggles Ebola survivors could face, as much of the effort was put toward treating and containing the disease.

Doctors who cared for Crozier were advised to wear protective gear. However, tests showed his tears do not contain the disease, which doctors say means casual contact with Crozier before he was admitted likely didn't pose a risk.

Although numbers in many countries are the lowest they've been in the past year, since December 2013, more than 26,000 people have been infected with the deadly disease.

The New York Times reports Dr. Crozier's eyesight has returned gradually after treatment with steroids and an experimental drug, and his left eye returned to blue. He left for Liberia in April with other doctors to examine Ebola survivors.