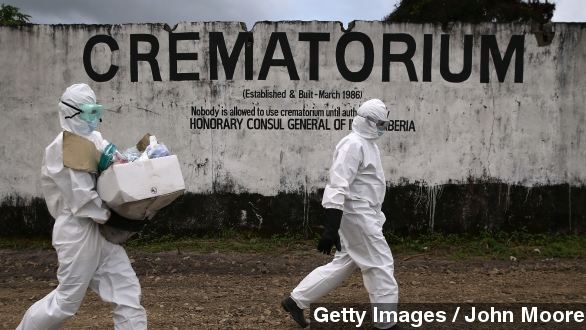 SMS
Ebola Claims 7,000 Lives, Hits Sierra Leone Hardest
By Ben Lawson
By Ben Lawson
December 20, 2014
The Ebola epidemic has claimed the lives of nearly 7,400 people and western Sierra Leone is the region to see the worst of the outbreak recently.
SHOW TRANSCRIPT

The death toll of the Ebola outbreak in West Africa continues to climb; the outbreak has killed nearly 7,400 people since it began, and the World Health Organization says that more than 19,000 have been infected across the region.

This news comes as U.N. secretary general Ban Ki-Moon tours the Ebola-stricken countries. Moon has said there are signs to be "cautiously optimistic" about stemming the outbreak in Sierra Leone but added there is still a long way to go before the country is rid of the disease.

Sierra Leone is one of the countries suffering the most from the outbreak. There have been 8,800 reported cases of Ebola in the country and 2,500 deaths. (Video via BBC)

The country's leading doctor Victor Willoughby died from the disease Thursday while waiting for the arrival of the experimental drug Zmapp. (Video via CNN)

The western part of Sierra Leone is where the disease is currently spreading the fastest and the WHO is sending a massive surge of staff and resources to respond.

But the approaching holidays present another challenge for authorities hoping to contain the outbreak.

In order to spend Christmas with their families people typically travel from major cities, like the capital Freetown, which is currently being hit hard by Ebola, to smaller, outlying villages. This creates the potential for the disease to spread even farther through the country

NBC reports Sierra Leone is also restricting travel throughout the western region to help control the outbreak. But some are skeptical on how effectively the government will be able to enforce that.

Last week, the country announced a ban on all public celebrations during Christmas over fears that such celebrations would further spread Ebola.

Which, a government official told Voice of America, has gone over fairly well: "So far we are very satisfied in the sense [that] we are having absolute cooperation throughout the country, particularly in the western area. And part of the reason accounting for that is people ... are just too tired and fed up with the general condemnation from the rest of the country."

This latest outbreak began in March and is the worst Ebola epidemic since the disease was discovered in 1976.