Eat Whole Grains To Up Your Chances Of A Long Life 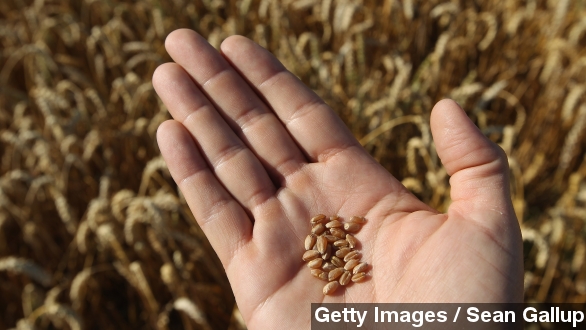 SMS
Eat Whole Grains To Up Your Chances Of A Long Life
By Jake Godin
By Jake Godin
January 6, 2015
New research suggests people can dramatically lower their chances of death from cardiovascular diseases and other causes by consuming whole grains.
SHOW TRANSCRIPT

There are already plenty of reasons to eat your grains, but here's another one — you'll live longer.

That's at least according to a new study coming out of Harvard's School of Public Health. According to researchers, eating more whole grains may decrease a person's chances of dying by up to 15 percent.

The team's findings were published in the latest issue of JAMA Internal Medicine. Researchers examined data from more than 118,000 nurses and health professionals who filled out dietary questionnaires every two to four years between 1986 and 2010.

From the data, researchers discovered out of the roughly 27,000 deaths of study participants, one-third fewer people died among the group that ate the most whole grains per day. (Video via Whole Foods Market)

Even after accounting for other factors such as obesity and exercise, researchers say data showed whole grains decreased a person's overall chance of death by 9 percent. Cardiovascular-related deaths went down 15 percent.

And all because of this stuff. Well, the whole-grain version of it. (Video via YouTube / Kamil Kotrnetz)

You see, grains consist of three parts: the bran, the germ and the endosperm. When grains are refined to make products such as flour, everything but the endosperm is removed. Whole grains, on the other hand, have the whole package and are much healthier.

It's for this reason the researchers at Harvard say they found a marked increase in people's life spans.

The study's senior author says, "This study further endorses the current dietary guidelines that promote whole grains as one of the major healthful foods for prevention of major chronic diseases." (Video via YouTube / kimdt27)

While the study says whole grains are good for your life span, the team found no link between a healthy whole-grain diet and a decrease in cancer death rates.