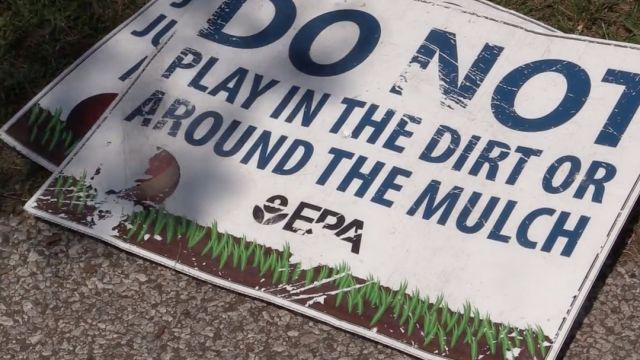 SMS
Flint Had Lead In The Water; This Town Has Lead In The Land
By Jamal Andress
By Jamal Andress
August 25, 2016
The government's lead threshold for emergency cleanup is 1,200 parts per million. At one property in East Chicago, the lead count was 75 times that.
SHOW TRANSCRIPT

The scenario is familiar — black community, negligence and lead poisoning. But instead of Flint, Michigan, this is East Chicago, Indiana.

"They had a water crisis there; looks like we may have a land crisis here," Sen. Lonnie Randolph told CBS 2 Chicago.

East Chicago's West Calumet Housing Complex, which houses about 1,000 residents, is being demolished due to lead-contaminated soil. The public complex was built in the shadows of two major lead plants in the 1970s.

But it wasn't until 2009 that the Environmental Protection Agency deemed the area a Superfund site, meaning it was a hazardous environmental waste site that requires cleanup.

The EPA's lead threshold for emergency cleanup is 1,200 parts per million. At one property in the complex, the lead concentration was found to be 75 times that in 2014.

Residents were first publicly alerted of the contamination this May when the EPA posted these signs around the neighborhood.

"It's horrible. Why were we the last to know?" an East Chicago resident tells WBBM.

Since then, the 1,000 or so residents have dealt with a whirlwind of developments. First, the mayor asked those living there to relocate while the EPA cleaned the soil. Shortly after, the Housing Authority announced the complex would force residents to leave. The local elementary school is also moving its students across town.

Now this group of residents is depending on $1.9 million in federal money to help them move. The EPA is hoping to get everyone relocated in the next four to six months before demolition begins.