E3 2015, Judged According To Grappling Hooks 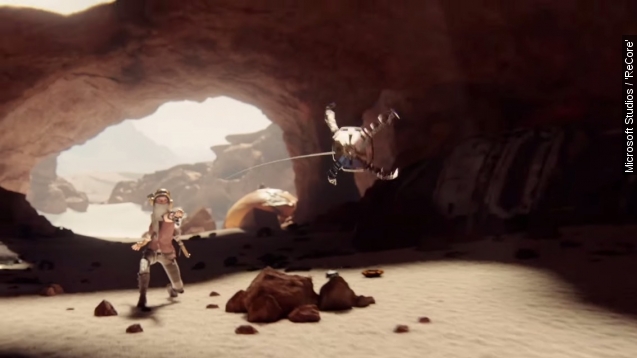 SMS
E3 2015, Judged According To Grappling Hooks
By Matt Picht
By Matt Picht
June 16, 2015
This year at E3, pretty much every big publisher showed off a grappling hook or two during its press conference. But which hook was the best hook?
SHOW TRANSCRIPT

Each year, when all the major video game publishers gather at E3 to trot out their hottest trailers, we always ask the same question: Who won? Which company had the best games, the biggest announcements and generated the most excitement?

This year, we'll be answering that question using a completely rational and totally well-thought-out metric: the grappling hook.

It's a well-established truth that any game with a grappling hook in it becomes about 150 percent better.

And the useful little device is experiencing something of a renaissance these days. As games become more focused on using vertical space, grappling hooks have started showing up in more and more games.

But did this year's E3 deliver the goods? Let's find out.

First up: Sony. In a presser jam-packed with enticing teasers, we had to wait until the very end to get a glimpse of their take on the grappling hook, courtesy of the "Uncharted 4" demo.

Now, Sony definitely gets points for showing off the hook in a gameplay context as opposed to in a prerendered cinematic. But right now, "Uncharted"'s grappling mechanic looks more like it can only be used in specific places, which is kind of a bummer.

And besides, "Uncharted" hero Nathan Drake is famous for his uncanny ability to clamber up and down all sorts of terrain with just his bare hands. Adding a grappling hook might just slow him down.

Heck, he was doing better in the demo before he got the hook out.

Moving on to Ubisoft, which brought the grappling hook to the one franchise that desperately needed it.

"Assassin's Creed: Syndicate" comes with a steampunk-style hook to match the Victorian aesthetic. The tool looks like it will give players a lot of fun, creative movement options — which is exactly what you want from an "Assassin's Creed" game.

And hopefully this means we won't have to laboriously climb up any more of those darn towers, either.

The hook does look a little too similar to the one Batman uses in the "Arkham" series, but hey — sometimes a little cross-pollination is good for the industry, right?

Next up, we've got Electronic Arts, and this is where things get … different.

Squashed in between the sports sims and the space RPGs was "Unravel," a quirky little game about a yarn-person rambling across the Swedish countryside. In this game, you don't get a grappling hook — you ARE the grappling hook.

Using strands of your yarn body to swing across chasms seems like a fun mechanic, but I'm not sure how much room to innovate is left in the 2D platformer genre. Still, cute idea.

Sticking with the theme of body as grappling hook: Bethesda and the all-grown-up Emily Kaldwin, who shows up in "Dishonored 2" with some disconcertingly limber arms.

Not sure exactly what this translates to in gameplay terms yet, but it looks pretty awesome, if nothing else.

And finally, Microsoft and their brand-new franchise, "ReCore."

Again, we don't know what the final game will look like, and cinematic trailers tend to be unreliable. But I'm still nominating this game for Best Grappling of E3. Because … come on, yanking the hearts out of robot monsters? And then potentially replacing them with the hearts of your robot friends to build a badass robot posse? How is this not going to be the coolest thing ever?

So there you have it: the best and brightest grappling hooks these video games have to offer. For more totally relevant, totally unbiased E3 news, head over to Newsy.com.

This video includes music from Tripcore / CC BY 4.0