Just Like Pluto, Ceres Is A Bit Busier Than We Thought 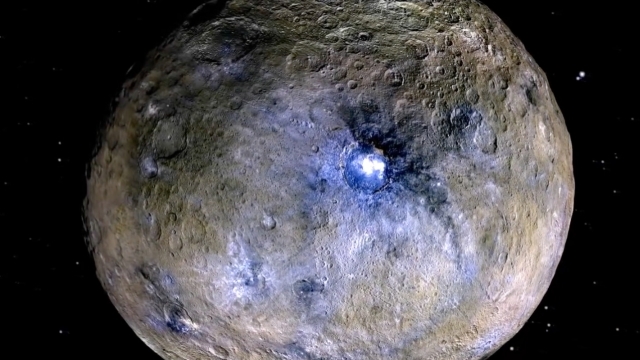 SMS
Just Like Pluto, Ceres Is A Bit Busier Than We Thought
By Evan Thomas
By Evan Thomas
September 1, 2016
New analysis of data from the Dawn space probe shows Ceres is more geologically active than once believed.
SHOW TRANSCRIPT

Not all asteroids are chunks of dead rock, especially not the solar system's largest one. A new batch of research on data from the Dawn probe shows there's a lot going on down on Ceres.

The dwarf planet hosts a relatively new cryovolcano, which spews molten chemicals like water or methane instead of lava. The one on Ceres is one of the best examples in our neck of space.

Scientists think it might be driven by some reaction with chlorine in the interior. Ceres doesn't have tectonic plates causing volcanic activity like Earth does.

SEE MORE: If We Ever Do Find Alien Life, Here's How It Might Happen

But Ceres' geology is much more active than scientists once thought, and a lot of it seems to be thanks to these ice volcanoes. They could have helped smooth out many of the old craters on the surface.

Those bright spots Dawn saw in craters? Scientists thought they might have been salts but are now pretty sure they're water ice that got exposed recently thanks to a landslide or impact. And if that's the case, they won't last long. The sun evaporates any ice on the surface within a couple of decades.

Dawn also has detected charged particles of the solar wind interacting with Ceres. Researchers say this is more good evidence for the atmosphere they first detected on Ceres in 2014 or could even point to a weak magnetic field.

If all this sounds familiar, it's a lot like what was recently discovered about Pluto. Turns out, the dwarf planets are more interesting than scientists once gave them credit for.