Duterte Says China Is In And The US Is Out 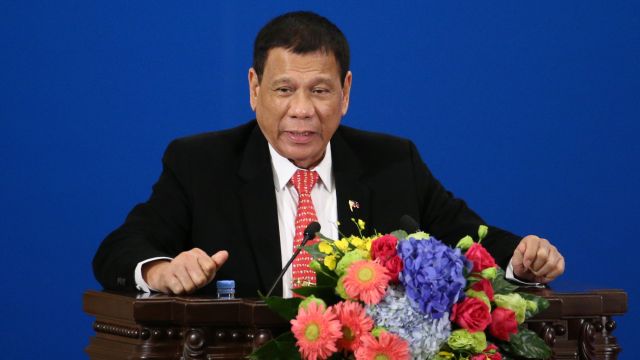 SMS
Duterte Says China Is In And The US Is Out
By Matt Picht
By Matt Picht
October 20, 2016
Philippine President Rodrigo Duterte has pledged to realign his nation away from the U.S. and toward China.
SHOW TRANSCRIPT

Philippine President Rodrigo Duterte wasted no time bashing the U.S. during his first state visit to China. Saying the U.S. has lost in the region, Duterte vowed to realign his nation with China.

And China's leaders seemed happy to accept that. The two nations agreed to sign $13.5 billion worth of deals this week. They also politely put aside the ongoing territorial dispute in the South China Sea.

Duterte's become infamous for his harsh words about the U.S., but they've rarely translated into action. The White House noted it still hasn't received any formal requests to sever ties with the Philippines.

Duterte's pivot to China is risky. U.S. companies have invested $4.7 billion in the Philippines, and the two countries traded $18 billion in goods last year.

And the U.S. still has a 66 percent approval rating in the country, compared to China's negative 31 percent favorability.