During An NCAA Game, A Coach Heard He'd Be Fired — And He Still Won 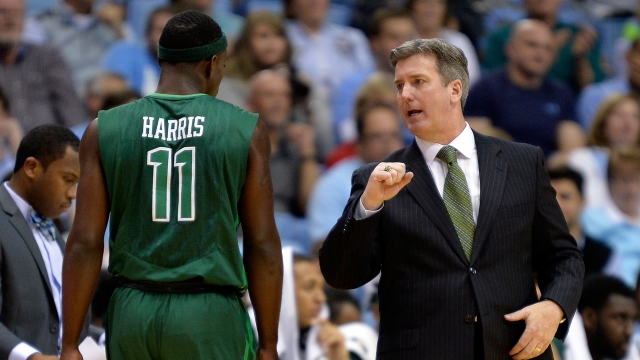 SMS
During An NCAA Game, A Coach Heard He'd Be Fired — And He Still Won
By Carter Woodiel
By Carter Woodiel
March 12, 2016
During an AAC tournament game, fans in the stands told Tulane University basketball coach Ed Conroy he'd be fired.
SHOW TRANSCRIPT

Coaching a struggling team in a postseason tournament is hard. But you know what's harder? Hearing from fans that you're going to be fired — in the middle of the game — and still managing to pull off an upset win.

"I know I had two guys behind the bench put their phone up and tell me, 'Hey, coach; you're gone.' So that was fun when you're trying to come back from an eight-point deficit," Tulane coach Ed Conroy said at his postgame press conference.

That was Tulane head coach Ed Conroy after his team's win over No. 2 seed Houston in the American Athletic Conference tournament Friday.

That day, reports started to circulate saying Conroy was going to be fired as soon as his team's season was over.

Most folks thought Tulane's last game would have happened by now. The Green Wave were 13-point underdogs against Houston.

But Tulane worked back from an 8-point halftime deficit to eke out a win, extending their season to at least the semifinals.

The news of his firing wasn't exactly a bolt from the blue for Conroy. He's won just 47 percent of his games in six years as Tulane's coach, and was 3-15 in conference play this year.

"We talked about it before the game," Conroy told ESPN after Tulane's win. "I told them, I said, 'Look, two weeks ago, they said they didn't like our program; there was reports out there, and you guys bounded together and played harder.'"

Conroy says he'll be coaching the rest of the year with his players in mind and is just glad to be a part of what's already becoming a very mad March.