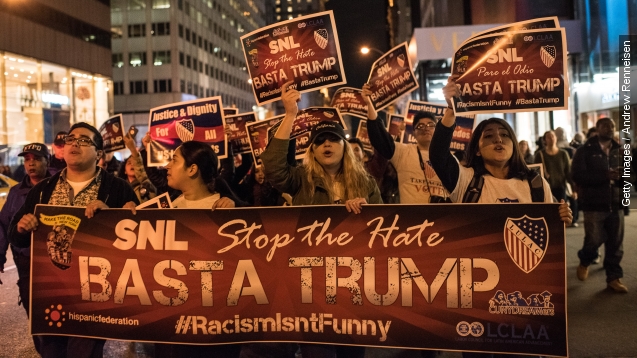 Politicians showing up on SNL is nothing new, but their appearances aren't usually met with this reaction. (Video via NBC / 'Saturday Night Live')

"For NBC to give Donald Trump a national platform to spread his message of hate, the racism, the misogyny, it's not right," said one of the hundreds of people protesting Trump's SNL appearance. (Video via Al Jazeera)

Since NBC announced Donald Trump would be hosting the live sketch show, several different groups have asked NBC to strip the presidential candidate of his hosting duties due to his statements about undocumented immigrants. (Video via NBC / 'Saturday Night Live')

Monday, the Congressional Hispanic Caucus wrote a statement to SNL saying, "Racism isn't funny and Trump's degrading comments about the Latino community have no place on national television."

CBS reports multiple petitions were dropped off Wednesday at 30 Rock to get rid of the billionaire. The campaign clearly didn't work, so hundreds took to the streets outside NBC yelling "dump Trump" and "go back to Europe." (Video via WABC)

Unsurprisingly, Trump seems unbothered by it all. Before the show aired, he tweeted about "electricity all over the place" but hasn't (and probably won't) address the controversy. (Video via Donald J. Trump for President, Inc.)

SNL hasn't addressed it either, likely because the old "any press is good press" thing. The show's ratings have been slipping for a while, and like it or not, Donald Trump has proven to bring eyes wherever he goes. (Video via NBC / 'Saturday Night Live')