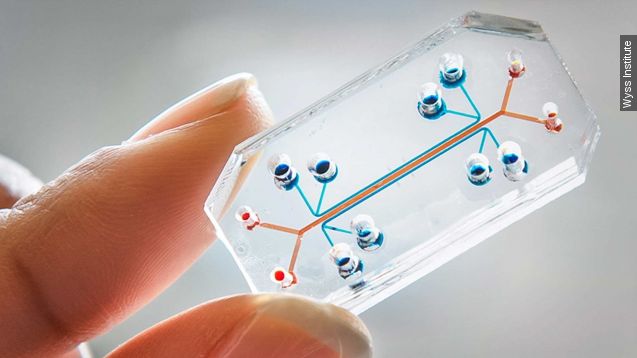 SMS
Drug Testing With Microchip Organs: No Living Things Needed
By Jamal Andress
By Jamal Andress
June 24, 2015
Researchers at Harvard University's Wyss Institute have essentially put organs in microchips, which could be used for drug testing and more.
SHOW TRANSCRIPT

As the worlds of medicine and tech continue to merge, the Wyss Institute at Harvard University has created a device that could change — and maybe completely do away with — animal testing in modern medicine.

Organs-on-chips is the name of the this new piece of tech, and according to the Wyss Institute, it functions like a living organ, like the human lung. Here's what goes on inside these microchips.

Along with lung on a chip, there's bone marrow on a chip, kidney on a chip and researchers hope to continue making these separate devices until they have enough to mimic whole-body physiology or in other words, "human-body-on-chips."

Researchers say this new method limits many of the problems facing the pharmaceutical industry when testing new drugs. First, it's less expensive – according to the Wyss Institute, testing a single compound the traditional way can cost upwards of $2 million.

Second, because the organ-on-chips devices use human cells, researchers say they can better predict human responses to drugs during tests.

"One of the things the pharmaceutical industry is finding is very high failure rates and often it's because the animal models being used to develop these drugs are not predictive of the human situation," Wyss Institute Researcher Geraldine Hamilton said.

And third: This option could be more sustainable than testing new potentially dangerous drugs on animals.

And it seems the Organ on Chips device has already gained some interest across the medical field. In June, Emulate Inc., the private company selling the tech, partnered with Janssen Pharmaceuticals, which is owned by consumer goods giant Johnson & Johnson.

Before that, Emulate received more than $40 million in grant money from the Defense Advanced Research Projects Agency, or DARPA.

The Organ on Chips design is also the recipient of the London Design Museum's Design of the Year for 2015, which called the Organ on a Chip not only beautiful but a "design that can significantly impact society now and in the future."