Drug-Resistant Bugs Could Lead To 10M Deaths By 2050 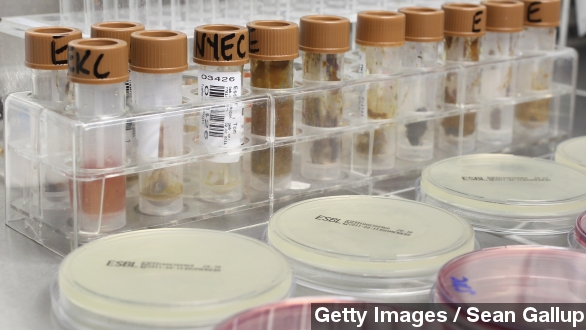 SMS
Drug-Resistant Bugs Could Lead To 10M Deaths By 2050
By Matt Moreno
By Matt Moreno
December 11, 2014
The Review on Antimicrobial Resistance says overprescription is factoring into some bugs being resistant to drugs.
SHOW TRANSCRIPT

Infectious bugs are getting stronger and more resistant to drugs. Because of that, a British government-commissioned review released Thursday says these "superbugs" could lead to more than 10 million deaths and a $100 trillion global economic impact by 2050.

The Review on Antimicrobial Resistance states about 700,000 people die from antimicrobial resistant bugs each year right now, but that could grow to 10 million — more than the number of people who die from cancer — if action isn't taken.

The review looked at three bacteria already showing concerning levels of resistance — Klebsiella pneumonia, E. coli and Staphylococcus aureus — and three public health issues in HIV, tuberculosis and malaria for which resistance is already a concern.

"Something like this which is going to affect everybody, it could have a devastating impact on international trade and travel and globalization,"Jim O'Neill said via the BBC.

After the findings were released, British Prime Minister David Cameron made a call to action saying, "If we fail to act, we are looking at an almost unthinkable scenario where antibiotics no longer work and we are cast back into the dark ages of medicine."

And much of the blame for these bugs gaining resistance seems to be getting put on an overprescription of drugs.

"People who are waiting for joint replacement, transplant surgery, cesarean section, those are high risk operations for infection afterwards. If we don't have antibiotics that work anymore, that's serious stuff. It means we can't do those operations," Dr. Hilary Jones told ITV.

The review focuses on the world's two most populated countries, India and China, as some of the most egregious offenders of overprescription.

O'Neill says a global effort is needed to fight these resistant bugs and is calling for new drugs to be developed.