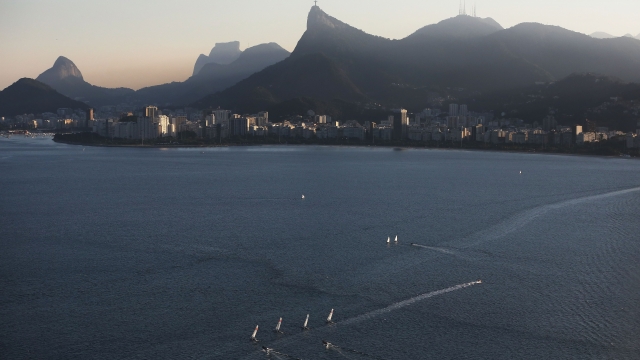 SMS
Drug-Resistant Bacteria Found Along Olympic Beaches In Rio
By Ryan Biek
By Ryan Biek
July 5, 2016
One of the areas affected is the site of the Olympic sailing competition.
SHOW TRANSCRIPT

Brazilian researchers have found drug-resistant bacteria along several of Rio de Janeiro's beaches, and the Olympics are merely a month away.

This kind of bacteria, known as "super bacteria," can't easily be killed by antibiotics. The scientists believe it entered the water when raw sewage from local hospitals was directed into the bay.

The Centers for Disease Control and Prevention notes at least 2 million people become infected with this kind of bacteria each year, causing 23,000 deaths.

Two beaches that are popular with tourists and locals have been affected.

And to make matters worse, the bacteria was found at two beaches that border the area where Olympic sailors are scheduled to compete. Still, the Olympic committee has not recommended moving the sailing competition to a different location.

A different set of researchers found super bacteria in that same bay back in 2014. At the time, roughly 70 percent of the city's sewage flowed untreated into rivers and that bay.

A worker for the city's water utility company recently told CNN 51 percent of sewage is now treated. But the city had also promised in 2009 to clean up 80 percent of the sewage in the sailing competition's bay.

But it looks like that promise will not be fulfilled in time.

ESPN writes that Rio was, at least in part, chosen as a destination for the games because of the city's problems: "The direct, flattering appeal to the International Olympic Committee was this: Bestow the transformative power of your three-week event on our city. We need the Games more than Chicago does, more than Madrid."

Besides water pollution, Rio has been facing concerns over the Zika virus, violence, corruption and a financial crisis.