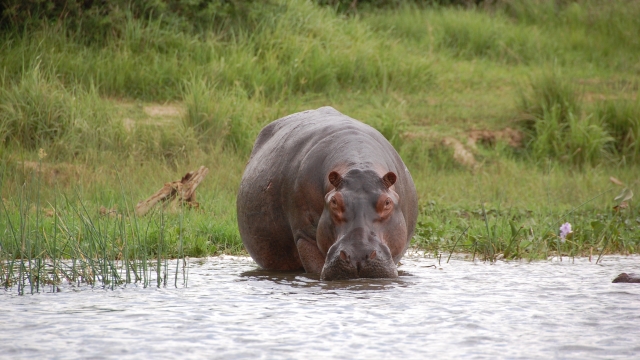 SMS
A Note To Exotic-Pet Owners: Don't Let Your Pets Loose In The Wild
By Lindsey Pulse
By Lindsey Pulse
August 27, 2016
A herd of hippos formerly owned by drug lord Pablo Escobar have become an invasive species in Colombia.
SHOW TRANSCRIPT

In another round of things we didn't think we had to say out loud, a note to exotic-pet owners: Don't let your pets loose in the wild.

A herd of hippos formerly owned by the infamous drug lord Pablo Escobar has been on the loose since his death in 1993.

And over the past two decades, those hippos have multiplied and become an invasive species in northern Colombia.

Escobar, who has an entire Netflix series based off his life, was known for his exotic pets. Aside from hippos, the kingpin reportedly kept giraffes, elephants and ostriches at his compound.

But hippos aren't native to this part of Colombia. In fact, they're not native to South America at all.

And if the herd isn't controlled soon, authorities fear the animals could pose a threat to people and native ecosystems.

If we move north on the globe, the problem of invasive animals doesn't get any better. Florida has had problems with several species invading the state — and no, we're not talking about pythons.

Capybaras, which basically look like overgrown guinea pigs, have found their way from South America to northern Florida. They're legal to own as pets, but it appears people are setting them free.

And those massive rodents eat a lot of plants, which isn't great for vegetation in the area they've inhabited. Granted, the animals  aren't considered an invasive species yet, but they're well on their way.

So, from the Asian carp to zebra mussels and the European starling, it appears we're already dealing with a lot of animals that shouldn't be around. Maybe keep the hippos penned up next time.